by Timothy Walker
in Opinions, Security 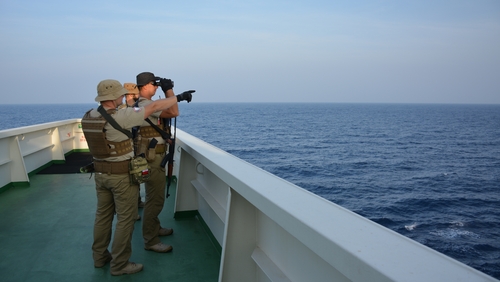 Coastal states and the shipping industry are confronting maritime security challenges in all of the seas and oceans surrounding Africa. These include the Gulf of Guinea in West Africa, the Gulf of Aden and the Mozambique Channel in Eastern and Southern Africa, and the Mediterranean and Red Seas.

Illegal arms and drug trafficking, piracy and armed robbery at sea (especially in the Gulf of Guinea) are the leading threats. There are also persistent concerns over illicit bunkering of oil and crude oil theft, maritime terrorism, human trafficking, environmental harm caused by waste dumping, illegal, unreported and unregulated fishing and overfishing. Africa must urgently strengthen its maritime institutions to tackle these problems.

The Kenya-Somali maritime boundary dispute exposes the several unresolved maritime border disputes around the continent. The mechanisms for resolving these conflicts peacefully are either contested or haven’t been given the required capacity.

Major maritime crimes in African waters are often transnational in origin and impact, defying simple, unilateral solutions. Yet the African Union and regional structures for mobilising joint action among African states seldom prioritise maritime issues or their consequences for the continent.

This must change. Maritime threats significantly undermine socio-economic progress across the continent, including the implementation of the African Continental Free Trade Area. They also fuel violence and corruption.

Maritime insecurity has become the focus of several recent United Nations Security Council (UNSC) interventions. In August, India used its UNSC presidency to convene the first open debate on ‘Enhancing maritime security: a case for international cooperation’. The UNSC is swiftly becoming the favoured forum for maritime security debates. And it was the three non-permanent African members that encouraged this development.

Equatorial Guinea organised and chaired a UNSC meeting on 5 February 2019 to discuss transnational organised crime at sea and the links between terrorism, piracy and illegal trafficking. On 18 December 2018, Côte d’Ivoire initiated a debate on the threat drug trafficking poses to stability in West Africa. Informal Arria-formula meetings called by member states complement these dialogues.

At the multilateral level, Africa is also taking stock of its unique maritime security issues. The African Union Peace and Security Council (PSC) discussed the matter on 23 July 2021. But this was only its seventh meeting on maritime safety out of the more than 1 000 the council has convened after its doors opened in 2004.

Since 2019, African countries have preferred their maritime concerns to be addressed by the UNSC. This gives the impression of a PSC unmoored and marooned from African states’ maritime security policies and interests. In the world’s eyes, this is making the UNSC, rather than the PSC, the leading forum for determining how best to fight maritime crime around Africa.

The PSC should address the fact that the AU’s maritime strategy continues to fall behind schedule.

Despite this lacuna, there is a lot that the PSC should be doing. At a 2013 meeting, the council described maritime security and the blue economy as the ‘new front line of Africa’s renaissance.’ By including maritime issues in Agenda 2063, the AU Commission has made the creation of blue economies in safe and secure African waters essential to its achievement.

Insecurity at sea makes it difficult for states to secure trade routes, protect and harness the benefits of their blue economies, and ensure economic growth and social development for coastal communities. The PSC and AU member states should begin crafting and implementing plans that cross-cut national, regional and continental levels.

The PSC needs to urgently address the fact that the AU’s 2050 Africa’s Integrated Maritime Strategy (2050 AIM Strategy) continues to fall behind its schedule, despite numerous AU decisions and requests.

According to the PSC Protocol, the council must address security challenges and promote peace and sustainable development. Yet as the Institute for Security Studies’ Len le Roux observed in 2009, the protocol and the 2004 Common African Defence and Security Policy ‘[leave] the impression of an Africa without a coastline or maritime zone, let alone broader maritime interests such as trade and maritime resources.’

The AU and PSC should set up an African maritime strategic support group to conduct progress reviews.

Maritime issues are inadequately mainstreamed in the overall work of the AU. There’s seldom any explicit reference to maritime security in the structures intended to mobilise continental action against conflict and insecurity. The lack of alignment between the maritime security plans of regional economic communities and the 2050 AIM Strategy further complicates this picture.

The AU formed a maritime strategic task force in 2011, comprising representatives from member states, the AU Commission and regional economic communities. Since 2017 it has focused on finalising the annexes to the African Charter on Maritime Security and Safety and Development in Africa (the Lomé Charter). These are now complete, so the task force should return to its primary job – drawing up a roadmap for implementing the 2050 AIM Strategy in line with international maritime law.

Maritime security and transnational crimes at sea must become a regular item in the PSC’s discussions and reports. The AU and PSC should also convene an open-ended African maritime consultative forum or strategic support group to facilitate periodic progress reviews.

A maritime platform could establish a body of experts who coordinate, share knowledge and make recommendations on maritime security and the blue economy. Such a strategic group would be vital to guide member states and other stakeholders in delivering on the AU’s 2050 AIM Strategy and Lomé Charter.

Above article has been initially published on ISS Today and is reproduced here with author’s kind permission.

Timothy Walker is the Maritime Project Leader and a Senior Researcher at ISS Pretoria. He leads a project that aims to strengthen African maritime security institutions. Since 2011 he has worked to promote maritime security as a policy priority with organisations such as the African Union (AU), the Economic Community of West African States (ECOWAS), Intergovernmental Authority for Development (IGAD), the Southern African Development Community (SADC) and the Indian Ocean Rim Association (IORA). Timothy has a Master’s degree in political and international studies from Rhodes University, South Africa.