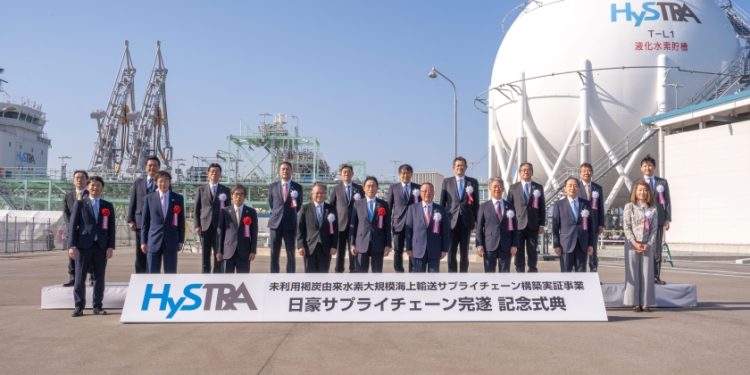 Japan’s hydrogen association HySTRA held a ceremony for the completion of the world’s first maritime transport of liquefied hydrogen, including its loading and unloading in Kobe, Japan.

The demonstration voyage by the world’s first liquefied hydrogen carrier, Suiso Frontier, proved that an international liquefied hydrogen supply chain is possible, marking a significant step towards the utilization of hydrogen as a new energy source.

The joint venture developed technologies to produce and transport large volumes of liquefied hydrogen, conducting demonstration tests between Japan and Australia to establish processes around the safe loading, offloading and storage of hydrogen.

Insights from the demonstration voyage will also guide the development of international safety standards and codes for transporting liquefied hydrogen.

Suiso Frontier, the world’s first liquefied hydrogen carrier, departed Japan in December 2021 and arrived in Australia in January 2022. The ship was loaded with liquefied hydrogen produced from coal in Victoria, Australia, and returned to Japan in February 2022, unloading the cargo to a landside storage tank.

The HySTRA joint venture partners will continue to gather data and findings, and collaborate with various parties to promote this project and contribute to the development of a commercial hydrogen supply chain, as more industries explore hydrogen as a new energy source.

However, the trip was not uneventful. Namely, the Australian Transport Safety Bureau (ATSB) is investigating a gas pressure control equipment malfunction on board the gas carrier Suiso Frontier after the ship had loaded liquefied hydrogen at Western Port, Hastings.

According to ATSB, on 25 January 2022, a flame was seen coming from the gas combustion unit’s exhaust on deck. The unit was immediately shutdown and isolated before the crew implemented the fire prevention response plan.

No further abnormalities were reported and there were no injuries, damage or pollution. As part of the investigation, the ATSB will interview relevant persons and obtain other evidence, including recorded data.