US-China trade war has both winners and losers

UNCTAD published a report discussing the ongoing trade dispute between US and China, highlighting that the trade war played a crucial part in the reduction of the bilateral trade, higher prices for consumers and trade diversion effects, increased imports from countries not directly involved in the trade war.

Specifically, the report states that US consumers are heavily affected of the US tariffs on China, due to the fact that their associated costs have been passed down to them and importing firms in the form of higher prices.

Yet, in light of the tariffs, Chinese companies have begun absorbing part of the costs of the tariffs by reducing the prices of their exports.

How have tariffs affected trade:

Although the report does not discuss about the impact of Chinese tariffs on US imports, it indicates that qualitative results are most likely to be analogous: higher prices for Chinese consumers, losses for U.S. exporters and trade gains for other countries.

In addition, of the US$ 35 billion import loss, US$ 21 billion (or about 63%) has been replaced by imports originating from other countries, while the remainder of US$ 14 billion was lost due to lower demand in the United States and/or not enough capacity from the rest of the world. Despite the tariffs, China has been able to preserve almost 75% of its trade in the products affected by tariffs.

In the meantime, Mexico shows an increase in its exports to the US by $3.5 billion, mostly in the agri-food, transport equipment and electrical machinery sectors.

The European Union gained about $2.7 billion due to increased exports, largely in machinery sectors. Vietnam’s exports to the U.S. rose by $2.6 billion, driven by trade in communication equipment and furniture.

Trade diversion benefits to Korea, Canada and India were smaller but still substantial, ranging from $0.9 billion to $1.5 billion. The remainder of the benefits were largely to the advantage of other South East Asian countries. Trade diversion effects favoring African countries have been minimal.

The report concludes that

More in general the results of this paper point to the fact that the United States tariffs on China are economically hurting both countries.

In early 2019, Eurasia ranked the US-China tensions at the second place of the top risks the world would encounter in 2019. Recently, in fear of the US-China trade war and the upcoming tariffs, the US West Coast ports, the Port of Long Beach, Port of Los Angeles, Port of Oakland, Port of Portland, Port of Seattle and Port of Tacoma, alerted Trump of disruption in their operations. 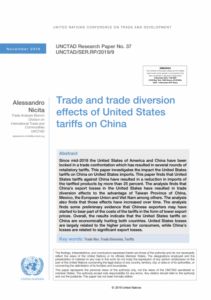