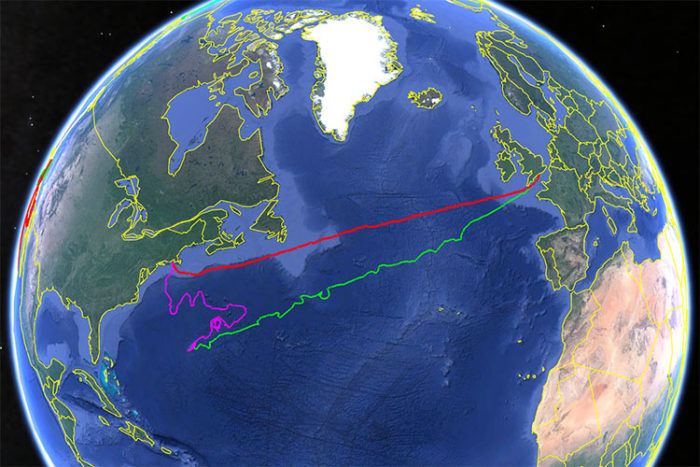 SD 1021’s mission track from Newport, RI, to the Gulf Stream (pink), Bermuda to the UK (green), and back across the North Atlantic to Newport, RI (red).

An unmanned surface vehicle (USV) completed its 68-day journey on October 22, sailing from Lymington in the UK to Newport, Rhode Island in the US, becoming the first autonomous vehicle to complete a westbound voyage, as well as the first unmanned technology to transit in both directions across the Atlantic.

The USV SD 1021, operated by Saildrone, Inc, departed Newport in January participating in a scientific research project on measuring the heat and carbon in the Gulf Stream.

The unmanned vessel made a stop in Bermuda for maintenance purposes and then continued its voyage towards Europe, arriving in the Solent on the south coast of England, from where it returned back to Newport.

During 2019, our saildrones have circumnavigated Antarctica, spent 700 days in the Arctic sampling the retreating ice edge, completed our first survey of the North Sea, and now crossed the hostile North Atlantic in both directions. There is no part of the [unfrozen] ocean that we cannot now measure.

According to the company, there are two transatlantic passages; from west to east, vessels take the northern route from New York to the English Channel, benefitting from prevailing westerlies and favorable current; east to west, vessels take the southern route, from Spain to Bermuda or the Caribbean.