In continuation of a US MARAD alert regarding increased piracy in the Gulf of Mexico, the RMI issued a Yacht Safety Advisory (YSA) for RMI-flagged vessels operating in or near Mexican territorial waters.

According to MARAD, pirates and armed robbers have targeted at least 20 fishing vessels and 35 oil platforms and offshore supply vessels since January 2018 in the Bay of Campeche area of the southern Gulf of Mexico. Meanwhile, significant underreporting of attacks in this area is suspected.

1. On 04 April at 0906LT, eight armed individuals in a boat approached a pipe-laying vessel at high speed 13nm northwest of Puerto de Dos Bocas, State of Tabasco in position 18:37N - 093:19W. The crew sounded the alarm, locked down the accommodation area, and mustered. As the boat approached the stern of the pipe-laying vessel, the armed men fired at the vessel. The master was able to use the vessel’s thrusters to prevent the boat from coming alongside. The armed persons subsequently abandoned their approach and departed the area. The crew notified port control via VHF radio of the incident and a patrol boat was dispatched to the location.

2. On 08 April at 0930LT, two boats with seven armed persons approached a dynamic positioning pipe-laying vessel at high speed in Hokchi Field, 6 NM northwest of Dos Bocas at 18:29N - 093:17W. The crew raised the alarm and mustered in the citadel. When three armed persons from the speedboat boarded, the master activated SSAS, increased speed, and commenced maneuvers resulting in the armed persons fleeing. The crew notified port control and the authorities dispatched a patrol boat to assist.

3. On 09 April at 2230LT, eight pirates boarded the drifting Italy-flagged offshore supply vessel REMAS in the Gulf of Mexico, 13 NM northwest of Puerto Dos Bocas near 18:36N - 093:19W. The pirates took a number of crew members hostage and used them as “human shields.” The pirates ransacked the vessel, stealing personal belongings and ship’s equipment before releasing the hostages and escaping. The robbers fired several shots during the incident, but no one was injured.

5. On the evening of 14 April at 2230LT, approximately six robbers boarded the anchored Gibraltar-flagged offshore accommodation barge TELFORD 28 approximately 12 NM north of Ciudad Del Carmen at 18:51N - 091:52W. The robbers, armed with automatic weapons and pistols, attempted to enter the accommodation area and then opened fire toward the superstructure. The robbers managed to steal high-value project equipment from the vessel before escaping. One crew member was injured during this incident and was transferred to a hospital. The Mexican Navy responded and assisted TELFORD 28 following the incident.

Incident reports should be submitted in writing to the Regional Mexican Navy command within 24 hours in the Spanish language. 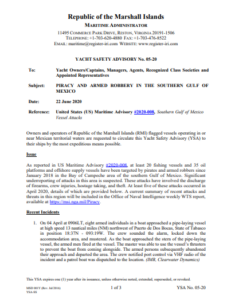