According to Martin Dixon, Director, Head of Research Products, following the dramatic halt in reefer equipment expenditure by cash-strapped shipping lines in 2016, a development that caused acute shortages in several areas, production of new refrigerated container equipment recovered during 2017, while it also continued to gain pace in 2018.

Drewry expects the reefer container equipment fleet to maintain a CAGR of 4.5% over the next five years which is slightly ahead of anticipated growth in containerised cargo traffic but will not be sufficient to bring supply back into equilibrium - see chart below where 100 equates to equilibrium

On the other hand, there is plenty of containership reefer slot capacity on most trades, though some routes with a high proportion of reefer cargo can face tight space during seasonal peaks.With cargo owners depending more and more on container carriers to transport perishable products, refrigerated shipping capacity could be constrained during seasonal peaks.

In addition, worldwide seaborne reefer trade saw an increase in 2018, but the pace of expansion was slower than trend and is expected to be more muted over the coming years. Drewry estimates that the volume of seaborne reefer cargo rose 3% in 2018 to 129 million tonnes which was weaker than the 4.4% gain achieved in 2017 and the 3.5% average annual rate recorded over the prior 10-year period. The weaker trade development was mainly due to a slowdown in shipments of meat and poultry, fish and seafood, and banana shipments, as well as a contraction in deciduous trade. 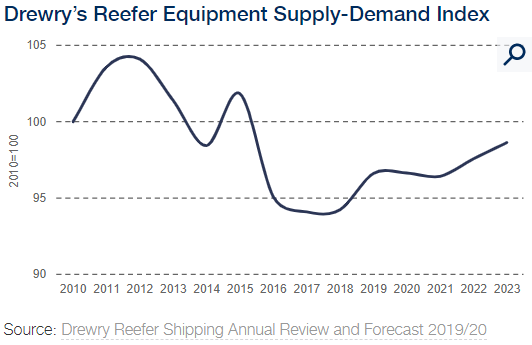 Regarding the future, Drewry forecasts that global seaborne perishable reefer trade will continue to expand but at a below trend rate of 2.7% a year in the period to 2023 as certain seasonal climate related factors such as El Nino reduce production output in the short term and growing geopolitical risk impacts wider trade growth prospects.

However, Mr. Dixon added that containerised reefer traffic will expand at a faster rate, as its share of the trade is forecast to rise from 81% in 2018 to 85% by 2023, with the specialised breakbulk reefer shipping fleet continuing its contraction.

As a result, in spite of a slowdown in the pace of growth in global seaborne perishable cargo trade, the additional boost of modal shift is providing container carriers with an attractively expanding market in reefer cargo.

With the exception of an especially weak 2019 caused by certain one-off weather related factors, expected growth is forecast to match that of the wider container shipping market with annual growth of around 4%. Along with tight container equipment availability, Drewry expects reefer container freight rates to outperform dry box rates.