As VesselsValue's Head Cargo Analyst, Olivia Watkins, reviews which yards have received orders and and which vessel types have been popular purchases, it is revealed that newbuilding orders fell to record lows during the second quarter of 2019.

The overall number of bulker newbuild orders reduced 73% for the first half of 2019, in comparison to the same period in 2018. Specifically, so far this year, Panamaxes have been the most popular size to order.

However, in spite of low earnings across the Capesize sector, 13 orders were placed by COSCO bulk for 208,000 DWT vessels at COSCO Shipping HI for USD 54 million each. Compared to the 45 orders this time last year for Capesizes, the 13 seems minimal, VesselsValue says.

The total number of tanker newbuild orders decreased 47% for the first half of 2019, in comparison to the same period in 2018. Namely, countries leading the way in terms of number of orders are Greece and Singapore. Greece has been ordering any tanker size ranging from VLCCs down to MR2s with 90% of the orders placed at South Korean yards. As for the Eastern Pacific, it placed an order for four option LR2s for USD 48 million each.

In addition, VLCC orders also fell by 60% for 2019 year until now, compared to the same period in 2018, in spite of a good winter for rates. 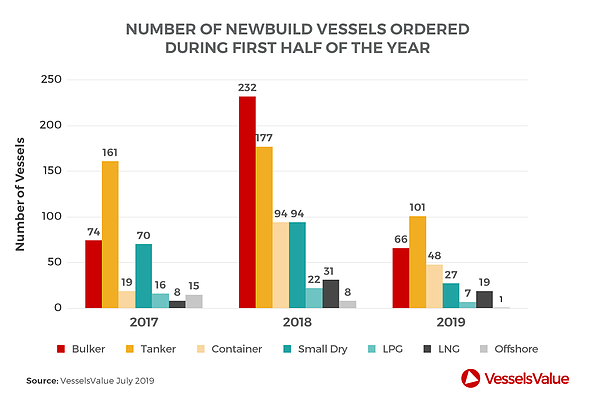 The container industry follows the same trend as the rest of the cargo sector for newbuilds. In fact, orders for the first half of 2019 were down by 49%, in comparison to the same months in 2018.

Of the 48 containers that were ordered, 28 were by South Korea, which is dominating the container newbuild market and has improved on their two orders from the first half of 2018.

The amount of LNG newbuild orders has reduced by 39% in the first half of 2019, in comparison to the same period in 2018.

The Greeks, once again, are leading with the number of orders placed. Namely, since the start of the year, Maran Gas Maritime has ordered five vessels.

Moreover, the total number of LPG newbuild orders is less by 73% for 2019 year to date compared to 2018 year to date. 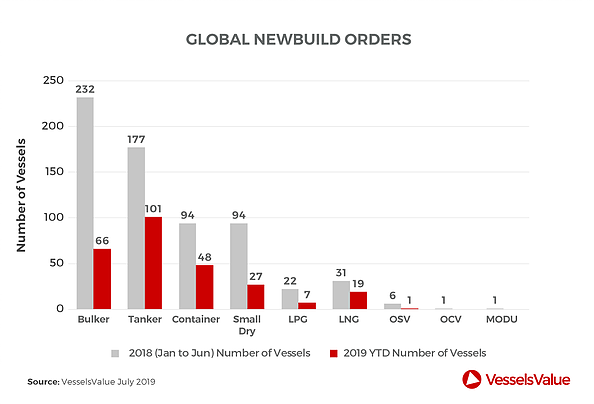 Finally, just one offshore newbuild order was placed in the first six months of 2019, by High Speed Transfers for an FSV/Crew Boat on the 22nd January 2019. Compared to the same period in 2018, newbuild contracts regarded six OSVs, one OCV and one MODU.

What is more, aiming to survive the oil price crash and the downturn in the offshore markets, the industry has seen many ships being sold for scrap, with owners consolidating. This fact led many companies to streamline their fleets, to reduce their operational costs.