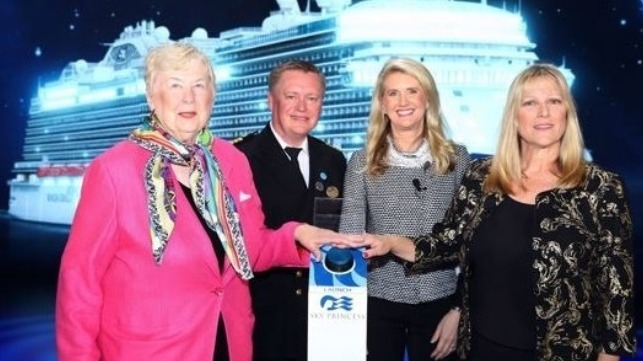 Princess Cruises named its newest vessel, Sky Princess, celebrating the women of the US Space Program, specifically honoring two women of NASA for their accomplishments in the program.

Namely, the two women celebrated for their achievements are Captain Kay Hire, and engineer Poppy Northcutt, who served as the godmothers of Sky Princess.

Firstly, Poppy Northcutt was the first female mission control engineer the time that NASA made history with its mission to the moon. Her team's calculations brought the Apollo 13 back home, resulting to the team earning the entire mission operations a Presidential Medal of Freedom Team Award.

Secondly, Captain Hire began her 30-year NASA career as a mechanical systems engineer, helping to launch more than 40 space missions. This career was followed by her future as an astronaut, logging 700 hours in space, flying more than 12 million miles and orbiting the earth 475 times. Also, she was the first female assigned to a military combat flight crew while serving in the U.S. Navy, and she retired from the U.S. Navy with more 35 years of service.

Additionally, Sky Princess Captain, Heikki Laakkonen, also recognised two female officers; Kerry Ann Wright, who started working in the cruise industry as a spa technician and went back to school to become a Second Officer working on the bridge; and Chief Security Officer Susan Morgan, who is the longest serving woman in the British Royal Navy.

In a tribute video, NASA recognised additional women for playing their own role to Reach for the Sky, such as

The Sky Princess represents the first MedallionClass newbuild, and recently completed her inaugural season in Europe. Now, it is sailing on voyages to the Caribbean through spring 2020.