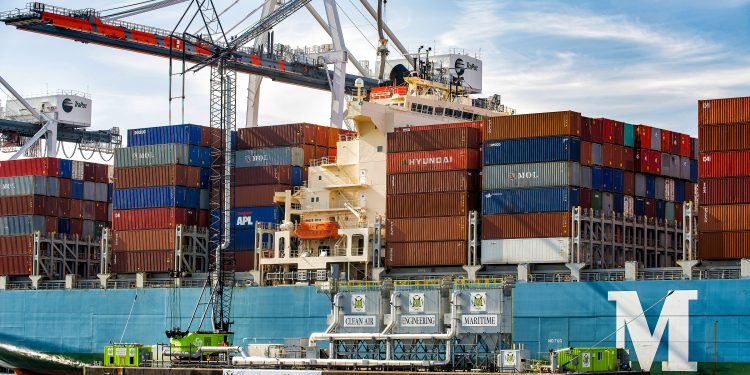 The Port of San Diego is moving forward with a system to control and capture cargo vessel emissions, also known as a bonnet. The bonnet will be available for use by cargo vessels that aren’t yet equipped to connect to shore power.

In support of the Port’s new Maritime Clean Air Strategy (MCAS), the Board of Port Commissioners has approved an agreement with Clean Air Engineering – Maritime, Inc. (CAEM) to design, build, and operate a barge-based emissions control and capture system, also known as the Marine Exhaust Treatment System (METS), which will be certified by the California Air Resources Board (CARB).

For vessels that aren’t yet shore power compatible, the METS places a bonnet over the vessel’s stack to capture and treat exhaust while the ship is at berth. CARB requires the exhaust treatment to be equivalent to electric power at berth. CAEM has received CARB approval on similar technologies that remove over 95% of particulate matter and nitrogen oxide.

The bonnet system also supports the Port’s MCAS “Health Equity for All” vision, and specifically the goal to reduce emissions from ocean-going vessels. Additionally, CARB regulations require that auto carrier vessels reduce emissions while at-berth at California seaports beginning in 2025 by utilizing either shore power or bonnet technology.

The total cost of the project is approximately $11.5 million, with the Port directing $4.9 million in grant funds received from the California Transportation Commission (CTC). CAEM is covering the rest. The bonnet system is anticipated to be operational by January 1, 2025.

CAEM is providing up-front capital financing for the portion of the project not covered by the CTC grant and has agreed to the following:

Other notable clean air projects in the works at the Port include: