As part of the port of Antwerp’s efforts to pioneer in the field of innovation and digitization, the Port Authority and the Antwerp blockchain start-up T-Mining have developed a pilot project aiming to make document flows safer and more efficient. This is expected to secure food chain while automating the administrative processes.

Under the project, documents, such as certificates of origin and phytosanitary certificates, are transferred via blockchain technology and the document flow is automated by means of so-called “Smart Contracts”.

A specific solution was developed for phytosanitary certificates, together with Belfruco, Enzafruit, PortApp, 1-Stop and T&G Global, to guarantee the safety of fruit and vegetables.

During this pilot project, fruit from New Zealand and destined for the European market is provided with digital phytosanitary certificates that are transferred via blockchain technology. Now, the New Zealand exporter will transfer this digital certificate to the Belgian importer, Enzafruit. It transfers it to Belfruco, freight forwarder within the SEA-invest group – which in turn has to transfer these certificates to the Belgian authorities before releasing the cargo of fruit from the SEA-invest terminal.

Today these paper certificates are sent by courier from New Zealand. This costs a lot of time and money. With the pilot project we can transfer these certificates from New Zealand to Belgium much faster and then transfer them to the competent authorities in Antwerp. In this way, everyone immediately has all the latest information and the necessary preparations and checks can be made faster. 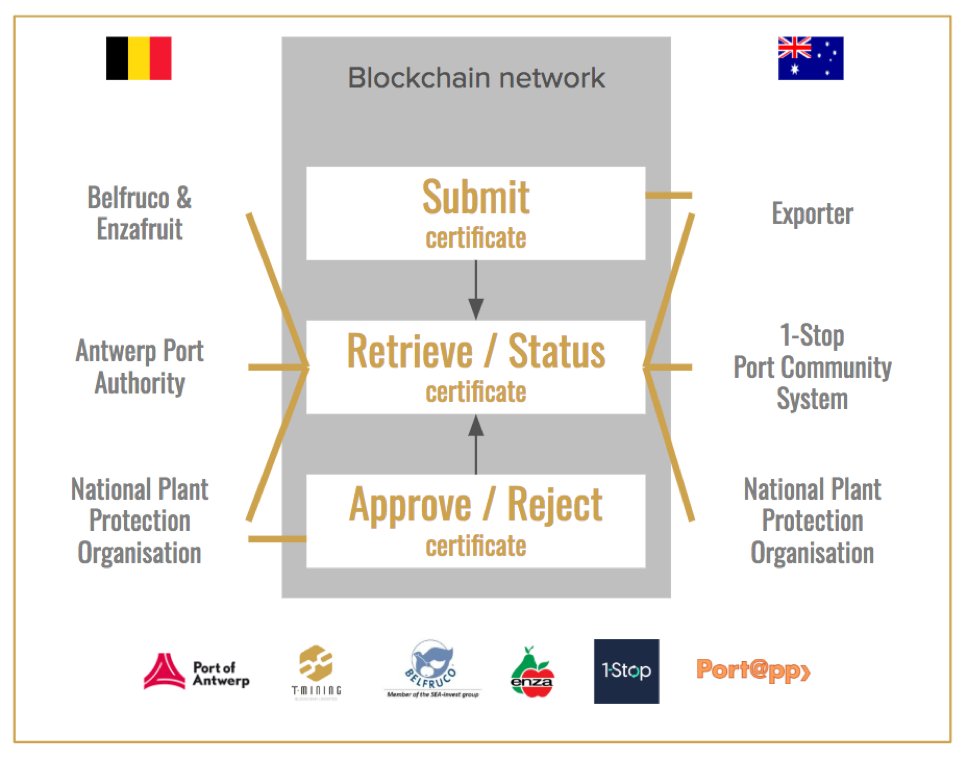 This latest move joins numerous blockchain initiatives in the maritime in recent months, with the Port of Brisbane announcing a similar project to ease shipping trade in late May.

Earlier this month, the Danish Maritime Authority announced it would use blockchain technology to reduce administrative burdens in trade and ship registration processes, the world’s first blockchain-based platform for electronic certificates of origin was launched by the Singapore International Chamber of Commerce and vCargo Cloud, while the world’s first blockchain platform for marine insurance became available for commercial use.