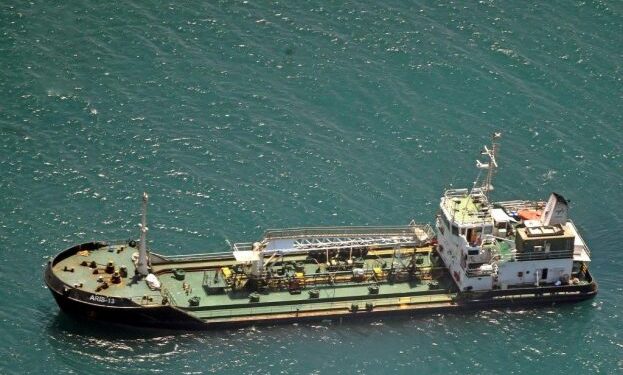 The Comoros Islands registered oil tanker, Aris 13 was sailing from Djibouti to Mogadishu with eight Sri Lankan crew onboard when it fell pray of hijackers. The EU Naval Force confirmed that the ship and its crew are currently being held captive by a number of suspected armed pirates in an anchorage off the north coast of Puntland, close to Alula.

On March 13, the 1,800 dwt oil tanker sent a distress call, turned off its tracking system and altered course for the Somali port town of Alula, The vessel was being followed by two skiffs. OBP notes that this incident marks the first hijacking of a large merchant vessel since the height of Somali piracy in 2012. Reuters reports that systems also indicated that the ship, while on its voyage, made a sharp about turn just after it passed the Horn of Africa.

Upon receipt of the mayday alert, an EU Naval Force maritime patrol aircraft was launched from its base in Djibouti to overfly the tanker and make radio contact with the ship’s master.  Despite hailing the ship several times, no contact was made and the situation on board remained unclear until late this afternoon, when the EU Naval Force operational HQ in London was able to make telephone contact with the ship’s master.

The master confirmed that armed men were on board his ship and they were demanding a ransom for the ship’s release, EU Naval Force reports. The EU Naval Force then passed the information regarding the incident to the ship’s owners.

The tanker was scheduled to arrive the Mogadishu port in Somalia on March 19. All available EU Naval Force assets are continuing to monitor the situation.

EUNAVFOR further informed that the pirates are demanding a ransom for the release of the vessel and its crew. The EU Naval Force said it has passed this information  to the ship’s owners.

Oceans Beyond Piracy notes that while this incident marks the first major hijacking since 2012, it does not yet indicate a large-scale return of Somali piracy. However, Somali pirates have still been quite active in recent months. OBP analysis indicates the following: