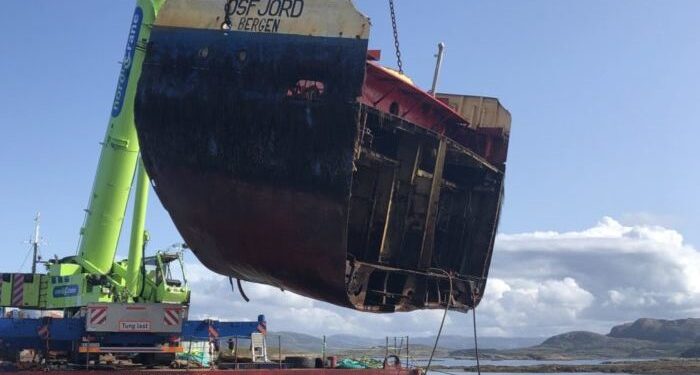 Norway began the wreck removal of the cargo vessel M/S Osfjord that grounded off Norway a year ago. The vessel was successfully removed, as the wreck removal process was divided in three steps to achieve full efficiency.

[Wreck removal is of a great importance for the shipping industry, concerning the safety of the mariners and the vessels that sail. Thus, IMO is fully supportive of the Nairobi International Convention on the Removal of Wrecks 2007 (“the Convention”). It provides a strict liability, compensation and compulsory insurance regime for States affected by a maritime casualty. It makes the registered owner of a ship liable for locating, marking and removing a wreck deemed to be a hazard in a State’s Convention area.]

According to BOA Offshore, the Norwegian offshore supply vessel owner, the wreck of the vessel has been already removed, reducing the danger of a casualty.

Observing and reporting dangerous conditions: The normalization of risk

In July 2019, the company launched a suitable method and was awarded the contract to perform a complete wreck removal. The method of work consisted of three steps.

The first step was to cut the wreck in 6 sections. Following, each section was lifted onboard Boabarge 42 using a mobile crane before transport of all sections to the scrap yard.

During the wreck removal, continuous monitoring was established to avoid any spills.

The finalisation of the wreck removal also included cleaning of debris from the bottom of the sea and the coast line was carried out in 26 days to the full satisfaction of both client and authorities.

Overall, the vessel ran aground in Linesoya waters, north of Trondheim, Norway, on September 22, 2018, in early morning. At the time, the vessel was sailing in southern direction from Brønnøysund to Kristiansund.

The vessel suffered engine issues in rough weather conditions and grounded at the coast of Trøndelag. All crew members were evacuated by a rescue helicopter.