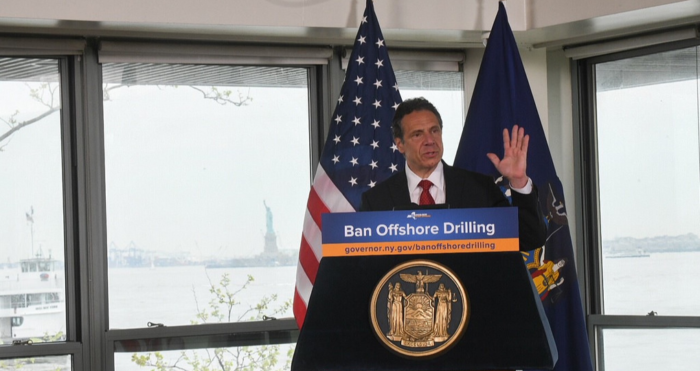 New York's Governor Andrew M. Cuomo announced the 'Save Our Waters' bill. This bill aims to prohibit the leasing of lands, including underwater lands, for offshore drilling and exploration, and drilling infrastructure in New York State waters.

In January 2018, the US government proposed to make more than 90% of the total offshore acreage in the US available to oil and gas drilling. This plan would open two areas of the North Atlantic coast close to New York State for fossil fuel exploration. Governor Cuomo formally requested on March 9 that New York waters be excluded from the federal drilling program.

The federal government's plan to open coastal waters to drilling shows an absolute disregard for science and history. Offshore drilling would make our coastal communities vulnerable to the dangers of oil spills and other drilling disasters and jeopardize the health of our robust marine economy. New York will do everything in our power to prevent environmental disasters and will continue to safeguard our offshore assets and bolster our efforts to support renewable energy development.

The 'Save Our Waters' bill:

Offshore drilling opposes to New York's efforts to move toward cleaner energy resources, including the recent nation-leading $1.4 billion investment dedicated to on-shore renewable energy projects and a target of developing 2,400 megawatts of offshore wind generation by 2030. The recently awarded projects include 22 solar farms, demonstrating that large-scale solar power is economically viable across the State, three wind projects, and one hydroelectric project.

The effort to protect New York waters from fossil fuel exploration and drilling adds to the Governor's recent effort to improve the State's marine life and boost Long Island's recreational and sport fishing industries. Namely, New York launched a reef program that will deploy and place materials, including tug boats, barges, and scows, as well as recycled materials from the demolition of the former Tappan Zee Bridge, in the Long Island Sound and the Atlantic Ocean. These materials will support the creation of six artificial reefs on Long Island.