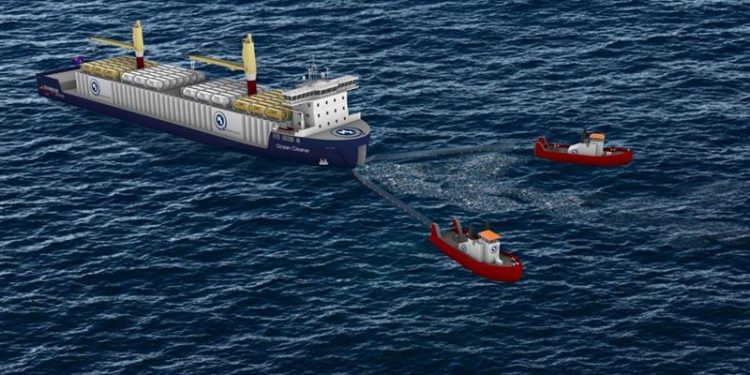 H2-Industries and TECHNOLOG Services will develop 3D designs for a concept ship that will collect plastic waste from the oceans and then convert it into clean hydrogen.

The ship is being designed to be more than 150 metres in length, the exact size to be clarified at the design stage, depending on optimal storage capacity.

The plan is for the ship to travel at four knots with the waste plastic collected by two smaller vessels towing a two-mile net that funnels the waste from the surface and up to ten metres below it.

The most novel feature of the vessel will be the open bow design that allows the collected plastic waste to be fed onto conveyors and into the storage hold.

This waste will be converted into hydrogen by the same thermolysis process that the H2-Industries’ plants will be using on shore.

For every 600 kg of waste collected, approximately 100 kg of hydrogen can be produced and then, stored in liquid organic hydrogen carrier, a fluid generally referred to as “LOHC,” which is a special liquid that can carry hydrogen, in 20-foot containers.

These containers will be transferred to smaller vessels by onboard cranes for delivery to shore. Because of the benefit of removing harmful plastic waste from the ocean, hydrogen produced in this manner can be classified as “beyond green,” or “greener than green” as it has been dubbed, recently.

The ship will be designed to run on electric motors using the LOHC produced, on board, as its fuel and creating electricity using H2-Industries’ 19 inch eRelease racks.

Each rack will hold 48 KW of installed power and there will be multiple racks to deliver the approximately two MW that a ship of this size will require.

However, one constraining factor for production is the volume of plastic feedstock. One rotary kiln can handle 600 kgs of waste every hour and that will generate approximately 100 kgs of hydrogen.

Each ship will be designed to be fitted with multiple kilns to match the speed of plastic collection. It is envisaged that each ship will collect plastic for around a year in one location before moving on to another water waste site.

To ensure no marine wildlife is endangered during the waste collection process, the vessel will employ industry tested technology developed for the seawater intake for desalination plants designed to protect wildlife and habitats.