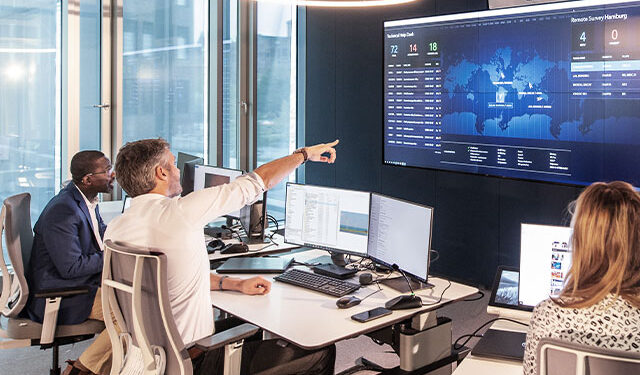 In light of the rapid increase of remote surveys due to the COVID-19 restrictions, it is of major importance for shipowners and crew to be in compliance with class and statutory regulations, while conducting such surveys.

According to Kamlesd Kumar, Head of Class Systematics &amp; Operational Centre, DNV, seafarers play vital roles in enabling remote surveys to deliver superior safety and business benefits to their shipmates and owners. Therefore, crew must be well-prepared for such operations onboard, and provided with real-time instructions.

Remote surveys were catching on for ships even before 2020; and for some types of survey, the approach could become ‘the new normal’ after the pandemic.

Mobile cameras
It is known that crews handling cameras on vessels, has become more common as Covid-19 lockdowns have prevented surveyors travelling to some locations.

As part of the remote survey process, operators and companies should work out how to avoid any safety risks to camera operators (or their crewmates) whose attention will be on handling the camera typically built into a smartphone, tablet or safety helmet.

As noted, crew members could then find themselves walking around with cameras to send DNV still pictures and livestreamed or recorded videos.

For example, we may ask the camera handler to zoom in on a replacement valve’s nameplate showing the manufacturer and serial number. This work will be slow as our remote surveyors give directions so they can witness everything they need to see.

As a result crew must be provided with clear instructions, in order to get it right safely.

Feedback
Actually, customer feedback boosts remote surveys and make the process easier and safer for crews acting as the eyes and ears onboard ships.

“Feedback is generally positive, but the deeper value comes in discovering what customers think could be done to improve the experience in future”…Kumar admits.

As the practice spreads, seafarers are providing increasing feedback that helps us to run smoother remote surveys while ensuring crew safety during the process, DNV said in its press release.

Using more than one mobile phone

Using two mobile phones with separate accounts proved very useful. “It meant we could document that things worked as they should by filming an activation and the result of an activation at the same time”…said to DNV, Captain  Stian Bøe from Buksèr og Berging AS, Norway, when shared his experience from the pilot trial of an annual remote survey for the tug BOKN.