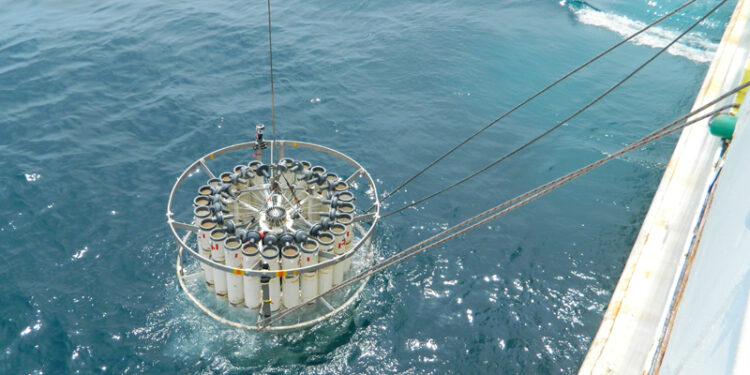 A rosette sampler carrying 24 empty Niskin bottles is deployed into the Pacific to collect samples of water after the Fukushima nuclear accident. (Photo by Irina Rypina, Woods Hole Oceanographic Institution)

Japanese government has reportedly decided to release more than 1m tonnes of contaminated water from the Fukushima Daiichi nuclear power plant into the sea.

According to Reuters,  Japan’s government has decided to release over one million tonnes of contaminated water into the sea, as a formal announcement is expected to be issued later this month.

It is known that the disposal of contaminated water at the Fukushima Daiichi plant has been a longstanding problem for the region, as it proceeds with an decades-long decommissioning project.

In fact, approximately 1.2 million tonnes of contaminated water are currently stored in huge tanks at the facility.

Although, Japan’s industry minister Hiroshi Kajiyama said no decision had been made on the disposal of the water yet, but the government aims to make one quickly.

“To prevent any delays in the decommissioning process, we need to make a decision quickly,” he told a news conference, as Reuters reported.

In light of the situation, environmental experts have long expressed their opposition to releasing the water into the ocean, while fishing groups have argued against it, stating that consumers will refuse to buy produce from the region.

However some scientists say the water would quickly be diluted in the vastness of the Pacific Ocean, and that tritium poses a low risk to human and animal health.