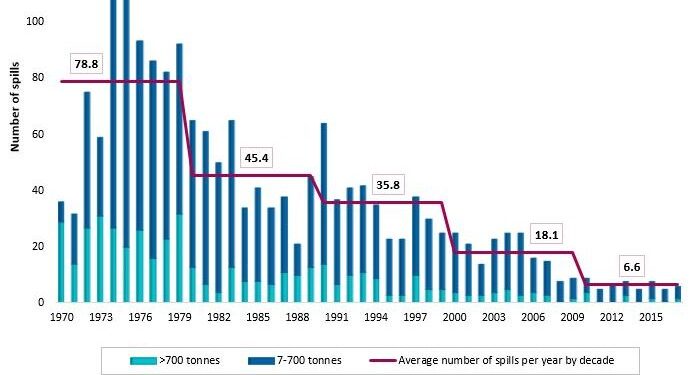 Over the last 48 years, statistics for spills greater than 7 tonnes from tankers show a marked downward trend as illustrated hereabove / Credit: ITOPF

The first large spill occurred in June, when the ‘Rama 2‘ sank in the Indian Ocean with over 5000 tonnes of oil onboard. The second incident concerned the sinking of Agia Zhoni II off the coast of Greece in September, spilling about 700 tonnes of oil.

Of the four medium sized spills, two were recorded in January 2017 in South Asia and Southeast Asia; both resulted from collisions and involved the release of bunker fuel. A third spill was reported in East Asia in August. This also involved bunker fuel and resulted from a vessel grounding in bad weather. The fourth medium-sized spill occurred in October in the USA.

Quantities of oil spilt in 2017

The total volume of oil lost to the environment recorded in 2017 was approximately 7,000 tonnes, the majority of which can be attributed to the large spill (>700 tonnes) that occurred in the Indian Ocean in June.

Over the last 48 years, statistics for spills greater than 7 tonnes from tankers show a marked downward trend.

When looking at the frequency and quantities of oil spilt, it should be noted that a few very large spills are responsible for a high percentage of the oil spilt. ITOPF cites the following examples:

A summary of the top 20 major spills that have occurred since the TORREY CANYON in 1967 is given below. It is of note that 19 of the 20 largest spills recorded occurred before the year 2000. A number of these incidents, despite their large size, necessitated little or no response as the oil was spilt some distance offshore and did not impact coastlines. For this reason some of the names listed may be unfamiliar. EXXON VALDEZ and HEBEI SPIRIT are included for comparison although these incidents are further down the list.