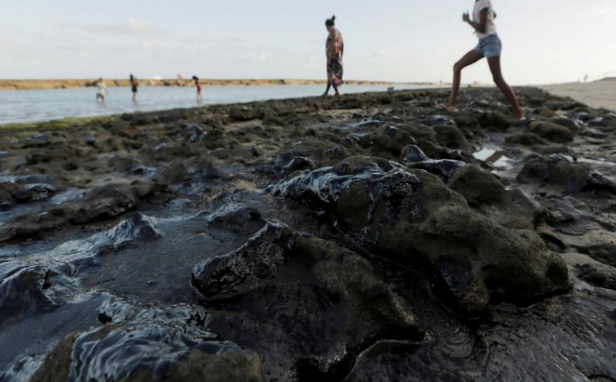 An oily substance in the form of lumps of black tar has been found on an extensive area of Brazil’s North Eastern coast, as reported by Proinde, club correspondents. The Brazilian Navy’s Integrated Maritime Safety Centre is carrying out an investigation on the maritime traffic in the area comprising of about 36,000 square nautical miles in Brazil’s exclusive economic zone, targeting mostly oil tankers looking at the area affected, the origin and nature of the incident as well as the wider impact on shipping.

In fact, on September 27, Brazil informed that an oil spill has contaminated beaches and coastline across eight Brazilian states.  It was estimated that beaches along a 3,000-kilometer coastline of Brazil’s Northeast region, are affected by the oil spill. In addition, some birds and sea turtles covered with oil have also been washed up, and are now being treated.

However, the authorities were not certain about where the oil originated from, with Brazil’s oil agency ANP Decio Oddone, highlighting that the agency believes the oil could have originated from a tanker transporting the crude far from the Brazilian coast.

According to Proinde Circular, Petrobras, the state oil company, stated that representative samples of the substance were examined and was further concluded that the product that currently pollutes the pristine northeastern beaches is crude oil that was neither produced nor imported by Brazil.

In particular, on Monday, October 7, President Bolsonaro stated that there is a suspicion about its country of origin.

Brazilian media further informed that a confidential report from Petrobras to IBAMA indicates that the oil bears the same fingerprint as Venezuelan crude, information that was not confirmed by either party.

Further to this, according to the environment minister, Ricardo Salles, it is likely that the product in question was possibly carried on a vessel sailing near the Brazilian coast, whose nautical distance from its oil facilities is approximately 6,650 Km.

Although merchant ships other than tankers carrying oil as cargo are not targeted by the various ongoing investigations, it is recommended that any sighting of oil slicks during navigation, whilst mooring or at anchor are promptly reported to the authorities.

Moreover, shipowners should inform their liability insurers and seek advice from agents about the need to perform hull cleaning prior to the vessel’s arrival at the next port or anchorage area.

Brazil signed the CLC 1969 and the OPRC 1990 Conventions, and according to its domestic legislation, oil pollution fines can reach R$ 50 million, without prejudice to other administrative and criminal sanctions and the polluter’s strict liability to fully redress environmental damages.