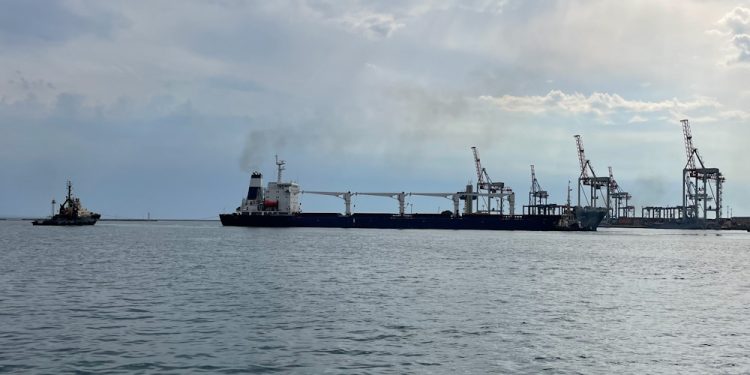 IMO Secretary-General Kitack Lim has welcomed the departure from Odesa of the first commercial ship to leave the port under the United Nations supported Black Sea Grain Initiative to establish a humanitarian maritime corridor for the safe passage of ships from Ukraine.

The M/V Razoni is the first commercial ship to leave Ukraine’s port of Odesa since 26 February 2022. The ship is bound for the port of Tripoli, Lebanon, carrying a cargo of 26,527 tonnes of corn.

I am pleased to see the first departure. The immense work by the UN and the relevant parties has now come to fruition. IMO will continue to do everything to support safe and secure shipping and ensure the safety of seafarers

Also commenting on the development, UN Secretary-General António Guterres said that ensuring “existing grain and foodstuffs can move to global markets is a humanitarian imperative.”

And so it begins! The first commercial vessel since February sailed from Odesa #Ukraine this morning carrying 26,000 MT of corn 🌽 as part of the #BlackSeaGrainInitiative. Teams from 🇺🇦, 🇷🇺, 🇹🇷, 🇺🇳 at the Joint Coordination Centre in Istanbul are monitoring its safe passage. pic.twitter.com/vdqbyrvgnz

The statement added that the UN emergency food agency, WFP, which is a major customer of Ukraine’s grain and cereals, was planning to buy, load and ship an initial 30,000 tonnes of wheat from Ukraine, on a UN-chartered vessel.

The Secretary-General hopes that this will be the first of many commercial ships moving in accordance with the Initiative signed, and that this will bring much-needed stability and relief to global food security especially in the most fragile humanitarian contexts

Addressing correspondents at UN Headquarters in New York on the shipment, Mr. Guterres said the ship was loaded with two commodities in short supply, “corn, and hope.”

While the “tragic war continues to rage”, said the UN chief, the UN would continue working every day, “to bring relief to the people of Ukraine, and to those suffering the effects of the conflict around the world.”