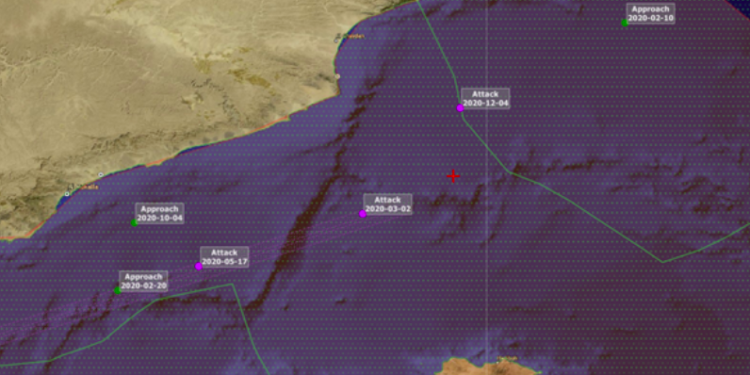 A vessel reported a suspicious approach by four small craft, containing two persons within each, while underway in the Eastern Gulf of Aden, according to UKMTO data.

This is the fist incident of this nature within the Eastern Gulf of Aden within 2021 with the last recorded incident recorded as an attack on the 4th December 2020, security intelligence firm Dryad Global informs. The incident follows two suspicious approach incidents which occurred within a 24hr period approximately 34nm northwest of Pointe A IRTC (International Recommended Transit Corridor), in the Gulf of Aden, in January 2021.

The reported approach is understood to have occurred 105nm southeast of the Yemeni Port of Nishtun, which has long been a key Saudi asset, both in the Yemeni Civil War, and long-term agroeconomic interests.

The Saudi-led Arab Coalition continues to operate out of Nishtun, with naval assets often docking for operations in the Gulf of Aden and the Red Sea. An important mid-point between the Persian Gulf and the Red Sea, Nishtun has been considered an end-point for oil pipelines running for Saudi Arabia and through inland Yemen,

Iranian forces have been rumoured to be using the Al Mahra region (and by extension Nishtun) to smuggle weapons, drones and missile parts to Houthi rebels.

In January 2021, the Saudis are understood to have prevented commercial vessels from unloading goods at Nishtun for several days with no explanation given.