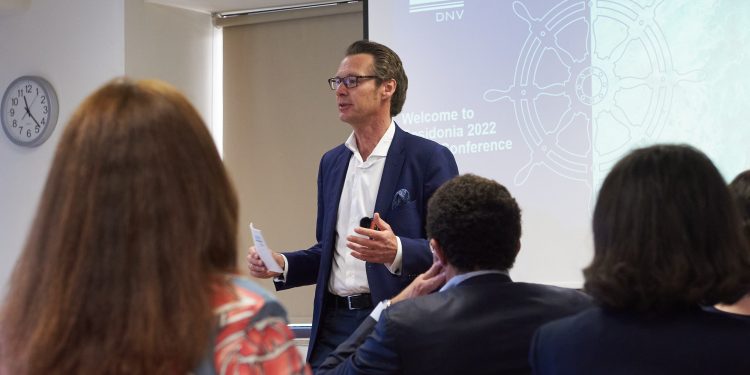 At a press conference held on June 3, DNV Maritime CEO Knut Ørbeck-Nilssen celebrated 100 years of the classification society’s activities in Greece, while looking ahead to the possibilities of a decarbonized industry based around increased collaboration and innovation.

The press conference focused on the emerging challenges facing shipping, and the Greek market.

On behalf of DNV, I thank the Greek shipping community for the faith they have shown us over the last century. The next 100 years and the challenges it will bring will be defined not by the challenges themselves, but by our ability to overcome them

In addition, Ioannis Chiotopoulos, SVP, Regional Manager South-East Europe, Middle East & Africa, announced a new collaboration with the National Technical University of Athens, where DNV Hellas will grant scholarships to the top 3 students at the School of Naval Architecture and Marine Engineering every year. This is in addition to the DNV organising free seminars for students of all the Naval Architecture Schools in Greece.

Mr. Chiotopoulos also underlined the importance of collaboration across industries, especially in meeting the global challenge of decarbonization. The DNV led Green Shipping Programme in Norway, where the country’s fleet of short sea ferries are being replaced with emission free vessels, creates a huge opportunity, he said.

This is because Greece has a similar geography, fleet size and regional needs, and building such ferries could also be facilitated locally, he added. This would give Greece the opportunity not only to decarbonize the fleet on its terms but creating jobs and business locally.

However, he noted that the drive to decarbonization could only be done in combination with the wider uptake of renewable energy in the region. In this matter, international developers are looking into offshore wind in Greece and are awaiting the release of the government’s framework agreement to be made public by the end of summer. In particular, floating offshore wind is of special interest to Greece, allowing it to harvest the strong winds of the Aegean Sea.

Floating solar is another technology that is being closely monitored by investors in the country. Greece’s high solar potential, extended coastline, and the availability of inland water bodies, all meant that the technology could be a vital part of the country’s energy mix.