China issues Guidances on Arctic Navigation in the Northwest Route 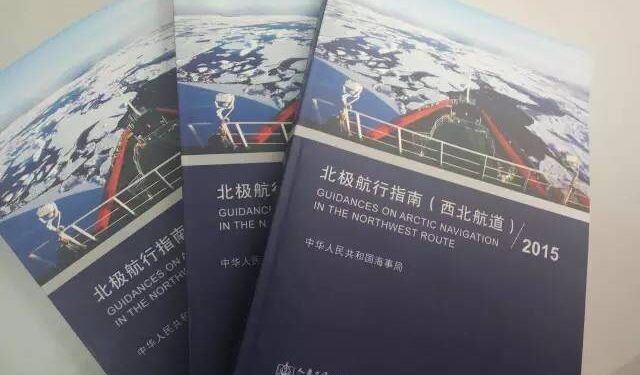 Meanwhile, the guidance takes into account the crew, ship, ship unloader, manipulation, and the relevant international conventions as well as coastal state management requirements etc. The guidance composed a sister piece with the “Guidances on Arctic navigation in the Northeast route 2014”, which will together provide navigation information services for international navigation ships planned navigating in Arctic waters.

The Northwest Passage, a sea route connecting the northern Atlantic and Pacific Oceans through the Arctic Ocean, along the northern coast of North America, is becoming ever more attractive for shipping as global warming melts the ice cover and keeps the route navigable for longer periods. The passage cuts the transit for ships by 30% when compared to the traditional routes passing through the Panama Canal.

In earlier April, China Maritime Safety Administration (MSA) issued a 356-page guide in Chinese offering detailed route guidance from the northern coast of North America to the northern Pacific as a means of promoting the potential of the route. The guide contains nautical charts and details on weather conditions.

“Once this route is commonly used, it will directly change global maritime transportation and have a profound influence on international trade, the world economy, capital flow and resource exploitation,” Liu Pengfei, the spokesperson for China Ministry of Transport said.

Liu predicts that there “will be ships with Chinese flags sailing through this route in the future” as it would save time and money for Chinese ship owners, nevertheless a specific time-frame on when this might become a more frequent practice has not been given.

On the other hand, numerous risks remain with regard to the safety of the route amid lack of infrastructure and inclement weather.

The ministry itself will continue to issue guidance on navigation on other major sea routes across the world.