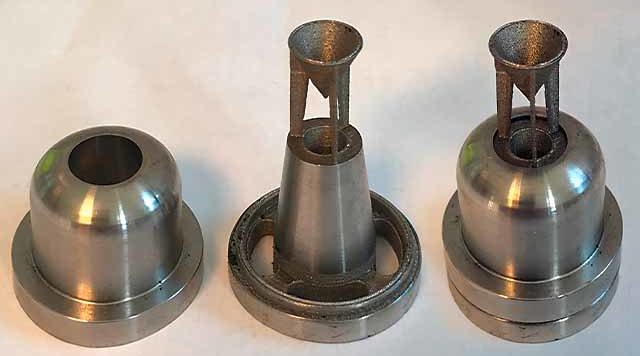 Credit: Wärtsilä Moss AS / The complex geometry of the inert gas nozzle (centre), which fits into the cap (at left; both parts assembled at right), can only be produced using Selective Laser Melting, an additive manufacturing process.

Wärtsilä Moss AS, part of Wärtsilä Marine Solutions used additive manufacturing (AM) in order to create a crucial component for an inert gas system; In this technological step, DNV GL assisted in a time when initial production prototypes displayed an unexpected characteristic.

Additive manufacturing or 3D printing, can utterly change the maritime equipment supply chain. Since today, technology provides the ease of printing metal, important spare parts and system components can now be printed on demand in locations around the world, including on vessels themselves.

We came up with a new design that could only be realized with AM fabrication. The geometry of the part, the complexity involved in producing it, makes it far too difficult and expensive to manufacture using traditional methods. It can only be brought to life with AM.

In general, AM provides many advantages to the manufacturing capability, as technology breaks any barriers and machines bring designs to life through the precise application of layer upon layer of metals.

Wärtsilä Moss AS project in collaboration with the University of South-Eastern Norway, used the ‘selective laser melting’ fabrication process which resulted to a challenge, or ‘anomaly’ as Lindløv comments.

About halfway through the PBF printing process a shift occurred, causing a small yet noticeable offset, or ridge, on the nozzle. It was only 0.375 mm, but it was unexpected.

According to DNV GL, Ramesh Babu Govindaraj, Principal Material Specialist, part of a DNV GL team, has been researching the matter of 3D printing from 2016. His research initiated a number of JDPs, pilot studies, innovation papers and, in November 2017, the introduction of DNV GL’s first classification guidelines for the approval of 3D printed products (class guideline DNVGL-CG-0197).

Later on in July, DNV GL issued the class programme for Approval of Manufacture (DNVGL-CP-0267) for AM, and DNV GL has since included AM as an accepted process for ships and offshore (similar to rolling, casting and forging) in ship rule DNVGL-RU-SHIP Pt 2 Ch 1 and offshore standard DNVGL-OS-B101.

As Mr Govindaraj commented, additive manufacturing is a new discipline as it requires caution and a know-how. He continued that those using additive manufacturing technologies should be ready to understand how the failure models will impact upon the integrity of materials and parts, keeping in mind the possibility that things can go wrong.

For instance, according to Mr Govindaraj, the ‘offset’ in the printed fuel nozzles was largely irrelevant, as machining could be used to create a flush surface. However, if the airflow inside was compromised by the resultant ridge, or the part itself was weakened, the potential consequences could be serious.

In the meantime, DNV GL’s lab in Høvik has hands-on in failure investigation and material technology for both maritime and oil and gas. A team of metallurgical experts, led by engineer Ole-Bjørn Ellingsen Moe, conducted a detailed testing programme, including microstructural assessments, hardness measurements, penetrant testing and radiography.

With critical components, fabricated and designed in new ways, the level of scrutiny required is exceptional. This degree of testing is tailored to provide complete insight and total assurance, helping our customers successfully navigate an unfamiliar manufacturing landscape.

Meanwhile, the thorough examinations provided a positive conclusion for Wartsila, as the material properties of the nozzle were not significantly impacted by the offset, while the crucial airflow inside was not disturbed.

In summary the nozzle is fit for purpose.

Now, Lindløv along with his team are conducting the first vessel trials with their AM-fabricated nozzle.