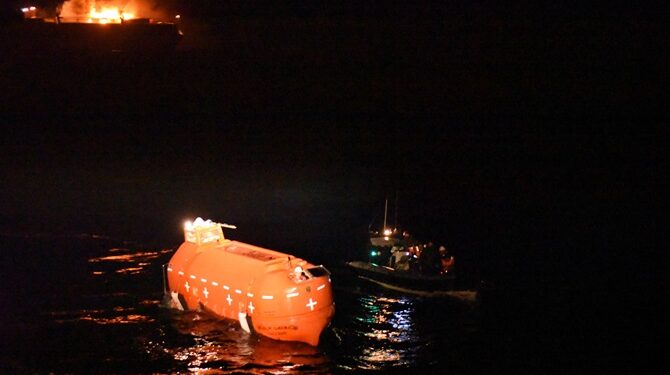 The Italian con/ro ‘Grande America’ that caught fire, finally sank, on March 12, in the Bay of Biscay at a position about 180 nm off the coast of France. The vessel that was on fire forced all its crew members to abandon it and seek for help.

Despite the crew’s effort to take the fire out, the situation worsen with several containers burning on board, and the ship halted her course.

The Royal Navy frigate ‘HMS Argyll’ went to assist, along with the rescue tug ‘Abeille Bourbon’.

The salvage tug Abeille Bourbon tried to take the fire out on March 11, but her efforts were suspended because salvors wanted to avoid worsening the Grande America’s starboard side list. The Bourbon was relieved on March 12 by the French Navy firefighting tug VN Sapeur.

The first response was affected by poor weather conditions, which are expected to worsen over the next 48 hours with winds of 30-35 knots, gusts to 50 knots and seas of 13-16 feet. The French frigate Aquitaine and the Sapeur are still on scene to ensure safety of navigation and maintain surveillance.

Concluding, Grimaldi Group, the owner of the sank vessel, commented that the fire was caused due to some cargo loaded on board the vessel. In the meantime, the shipowner is taking its measures to eliminate any potential damage to the marine environment from the vessel’s sinking.