Adam has been a professional mariner all of his adult life and has gained significant experience of managing people, budgets and organisational change from a wide range of multi-disciplinary roles – both at sea and ashore – in the defence, private industry and the public sectors. He joined the Royal Navy in 1988, initially as an Engineer officer where he gained Chartered Engineer status and held a sea-going role as Deputy Head of Department, but when appointed ashore into a teaching role, he swiftly transferred to the Operations (Warfare) branch to realise his ambition of spending more time at sea. This move was rewarded by his being appointed in command of HMS Grimsby and subsequently HMS Bangor as their Commanding Officer several years later. Alongside his seagoing roles, Adam has also worked in the UK’s Joint Force Headquarters (where he visited 26 countries in 3 years on defence diplomacy and operational liaison visits, including working alongside the Iraqi Department of Defence and working with the United Nations in Sudan), has attended the Advanced Command and Staff Course and also worked in the Ministry of Defence, London. In 2013 Adam decided to make the move ashore more permanent and, after a time-limited interim role as an engineer Project Manager for Babcock International, took up the post of Marine Officer and Harbour Master of Salcombe (a Local Authority port) from 2014. In 2018 he took on the larger challenge of running Tor Bay Harbour which includes the enclosed ports of Torquay, Paignton and Brixham – England’s largest fishing port. In all of these roles, the identification of hazards, risks and their consequences (if not properly controlled) has been vital. He is thus very well placed to continue to build on the success of his predecessor in his role as CHIRP’s Director (Maritime). 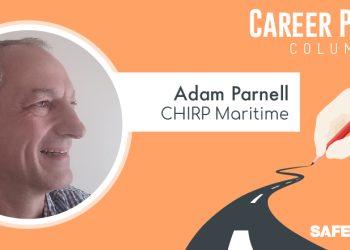 Mr. Adam Parnell, Director (Maritime), CHIRP, says that the maritime career offers many opportunities for both personal and professional growth and advise us to start actively networking and invest in continuous learning. With regards to safety incident reporting, Mr. Parnell says that the picture picture is missing; in that regard, CHIRP Maritime are focusing on data-sharing partnerships.