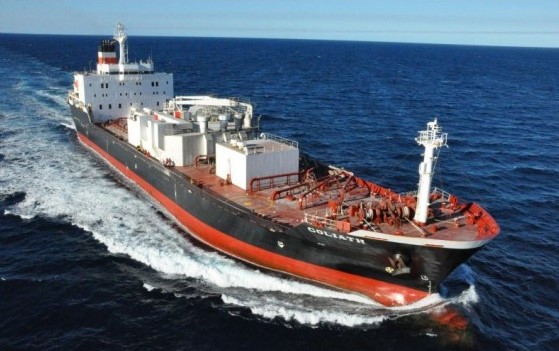 ATSB published its preliminary report on the bulk cement carrier Goliath, which collided with the tugs York Cove and Campbell Cove in Devonport, on 28 January 2022.

On the morning of 28 January 2022, the 143 m Australian-registered, bulk cement carrier Goliath was on passage from Melbourne, Victoria to Devonport, Tasmania. The ship had departed Melbourne the previous evening and was bound for the bulk cement facility at Devonport’s berth number One West, where it usually berthed port side alongside.

At about 1106, as the ship approached Devonport port limits, the third mate tested the ship’s bow thruster and had the main engine put on stand-by for manoeuvring. Shortly after, the master called Devonport vessel traffic service (VTS) on the port’s VHF radio working channel (VHF channel 14). The master reported the ship’s draught and pilotage exemption details to the VTS and requested permission to enter port limits. The VTS granted permission and advised that there was no expected traffic in the port. The weather at the time was overcast with slight seas and a light north-easterly breeze. The tide was ebbing with low water at Devonport predicted at 1422.

At about 1142, crew on board the mooring lines boat Rubicon broadcast a call to Devonport VTS on VHF channel 14 advising that the boat was underway in preparation to assist with Goliath’s berthing. The call was acknowledged by VTS. Following this, Rubicon broadcast a call on VHF channel 14, directed at Goliath, requesting a radio check. On board Goliath, the master asked the second mate to deal with the radio call as he was busy conducting the ship on the approach to the swing basin.

At about 1144, Rubicon’s crew again broadcast a call directed at Goliath, this time requesting a radio check on VHF channel 6. On board Goliath, the call from Rubicon was heard by the bridge team, most likely over the portable VHF mooring radio as it was the only radio tuned to channel 6. However, being unable to immediately locate the portable VHF radio, the second mate responded to Rubicon’s call using one of the VHF radios on the bridge-front console. The second mate then remained near the VHF radios, to the left of the master, while the chief mate went to locate the portable VHF mooring radio.

At about 1145, the master used the main engine and bow thruster to commence slowly turning the ship to starboard in preparation to swing it onto a northerly heading for approaching the berth.

As the manoeuvre progressed, the master felt that the ship was not swinging as expected and closing with two tugs moored at berth number Three West ahead. In an effort to arrest the ship’s movement ahead, the master set the VecTwin joystick to the ‘astern’ setting[7] and, at 1147:22, put the main engine ‘half ahead’. A few seconds later, at 1147:29, the master used ‘full ahead’, but the ship’s movement ahead continued to increase, with the speed now about 2.9 knots. Meanwhile, the bosun had begun reporting rapidly decreasing clearances to the tugs ahead. The bridge engine telegraph data logger shows that at 1147:41, the telegraph was placed at ‘half ahead’ before quickly being returned to ‘full ahead’.[8] At 1148:04, the master placed the telegraph at ‘navigation ahead’ (that is, maximum available rpm) as the ship’s speed increased to 4 knots.

As the ship’s speed continued increasing, the master checked the rudder angle indicator located in front of the port wing console and found that both rudders were still amidships and not at the angles corresponding to the VecTwin joystick setting as expected. The master called out to the second mate that the steering was not in VecTwin steering mode and immediately placed the engine telegraph to ‘stop’.

At about the same time, at 1148:22, Goliath collided with the two tugs while moving at a speed of 4.7 knots (Figure 6). The ship struck the tug York Cove’s amidships area on its starboard side. York Cove was moored outboard of and alongside the tug Campbell Cove. Both the tugs were severely damaged and began to take on water almost immediately. The tug Wilga and the fishing vessel Del Richey II, berthed to the north and south of the two impacted tugs respectively, were not impacted.

Specialist ATSB investigators attended Goliath in Devonport to collect relevant physical, documentary, and electronic recorded evidence, including from TasPorts, and interviewed the master and relevant crew.

The investigation is continuing and will include a review and assessment of the:

Should a critical safety issue be identified during the course of the investigation, the ATSB will immediately notify relevant parties so appropriate and timely safety action can be taken.

A final report will be released at the conclusion of the investigation.