Ministers from the ten Association of Southeast Asian Nations (ASEAN) countries issued a joint statement which describes illegal trade of wildlife as “among the greatest challenges of ASEAN as the economic, social and environmental repercussions are severe and widespread in scale.”

The commitment comes just weeks ahead of the 18th Conference of the Parties to the Convention on International Trade in Endangered Species of Wild Fauna and Flora (CITES), which will take place in Colombo, Sri Lanka this May.

The ASEAN statement also commits member states to improving international co-operation as part of their combined efforts to meet obligations under the UN 2030 Agenda for Sustainable Development Goals (SDGs), one of which calls on countries to “Take urgent action to end poaching and trafficking of protected species of flora and fauna and address both demand and supply of illegal wildlife products”.

ASEAN has also vowed to ensure the successful implementation of the Plan of Action for ASEAN Cooperation on CITES and Wildlife Enforcement, 2016–2020.

A 2012 WWF-commissioned report estimated the value of illegal wildlife trade worldwide as at least USD19 billion per year, making it the fourth largest illegal global trade after narcotics, counterfeiting, and human trafficking.

Despite the relentless pressure on natural resources, there are some positive signs of meaningful action in Southeast Asia, and it’s extremely encouraging to see that Thailand, in its capacity as overall chair of ASEAN for 2019, has chosen wildlife trafficking as a priority environmental issue,

Find out the joint statement herebelow: 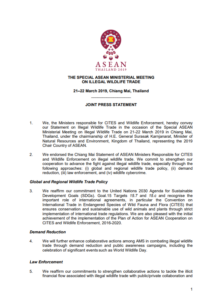