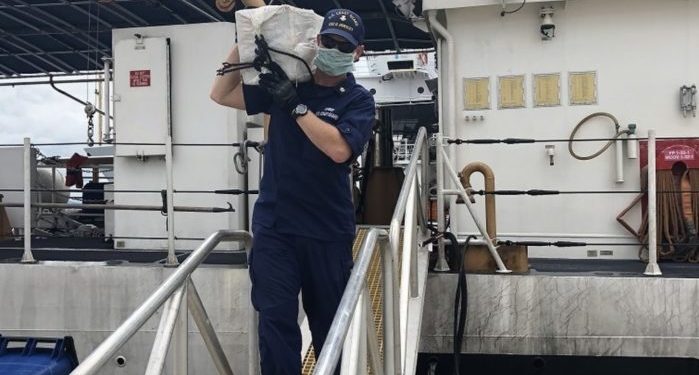 For the firsts operation, US Coast Guard Cutter Alert returned after a 50-day counterdrug patrol to the Eastern Pacific Ocean.

The 75-member crew aboard ‘Alert’ conducted multiple law enforcement boardings in international waters off the coasts of Central and South America. The cutter interdicted a suspected smuggling vessel and seized about 1,300 pounds of cocaine worth an estimated $17 million.

This interdiction is the result of ongoing multi-agency law enforcement efforts in support of Operation Caribbean Guard and the Caribbean Border Interagency Group.

Moreover, the crew of the US Coast Guard Cutter Bernard C. Webber offloaded 3,516 pounds of cocaine and 50 pounds of marijuana worth over $47 million off the Caribbean Basin .

USCG increased US and allied presence in the Eastern Pacific Ocean and Caribbean Basin, which are known drug transit zones off of Central and South America, as part of its Western Hemisphere Strategy.