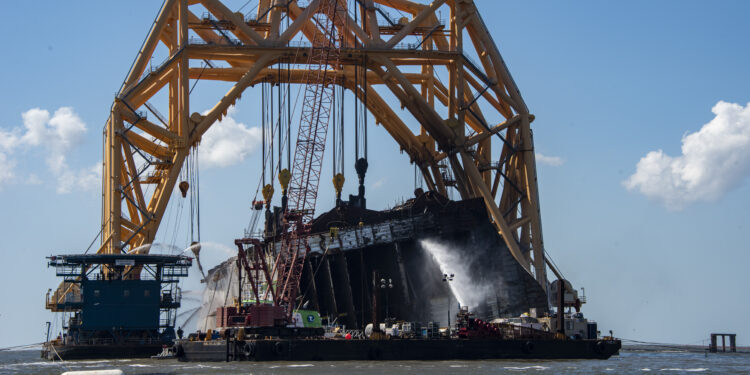 State environmental regulators from Georgie are proposing a $3 million fine for the Hyundai Glovis over the Golden Ray capsizing.

More specifically, the Georgia Environmental Protection Division said that pollutants, petroleum products and debris from the South Korean freighter Golden Ray were discharged into the water.

The South Korea-based firm will have a year to either pay the penalty or submit a plan for a proposed “supplemental environmental project” and obtain a reduced penalty, the agency said.

The ship capsized on Sept. 8, 2019, shortly after departing the Port of Brunswick.

However, oil leaks continued several months later as workers cut the boat into chunks for removal from the ocean.

Last summer, oil gushed from the wreckage and washed onto the beaches and marsh grasses of St. Simons Island, a popular tourist area.

According to The Brunswick News report, the car carrier Golden Ray was grounded after the pilot aboard, Captain Jonathan Tennant deliberately took it out of the channel and contributed to the best possible outcome for the incident.

Moreover, the Executive Director of Georgia Ports Authority, Griff Lynch, congratulated Tennant’s action to take the stricken vessel out of the channel, at a Brunswick State of the Port address on October 2. Moreover, Lynch also thanked the U.S. Coast Guard, Brunswick Bar Pilots’ Association and port workers for their efforts thank all those involved in the rescue and salvage operations.