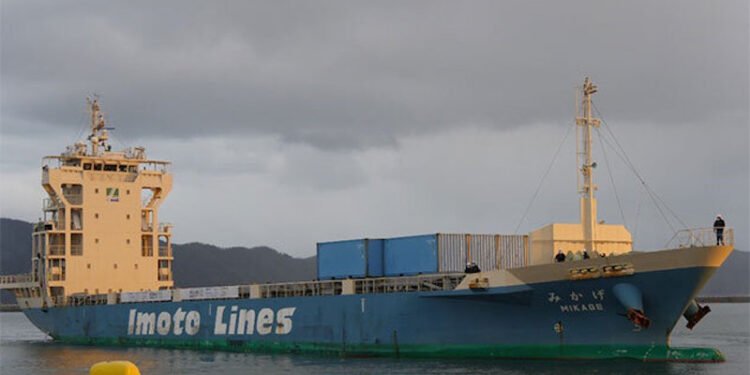 A containership has finalized an unmanned voyage between two ports in Japan, signifying the country’s advancement towards a more autonomous future.

Specifically, he 194 teu Mikage moored automatically on January 25, using a drone at Sakai port, having left from Tsuruga port. The ship is owned by Imoto Lines.

The ship was taking part in the Nippon Foundation-led unmanned ship project MEGURI2040, while similar tests were also conducted on an MOL-controlled ferry.

Namely, under the “Joint Technological Development Programme for the Demonstration of Unmanned Ships – MEGURI2040” led by The Nippon Foundation, partners conducted a pilot project in Yokosuka City with the aim to establish the technology for autonomous ship operations.

On this occasion, the Proof of Concept was successfully completed in a voyage route between NewMikasa Pier and Sarushima Island in Yokosuka City, in which the ship operations, including berthing, were fully automated using an existing small-sized passenger boat.

Through this Proof of Concept, the autonomous ship technology, which was applied by Mitsui E&S Shipbuilding on an existing small-sized passenger boat owned and operated by Tryangle, achieved fully autonomous ship operations including unberthing, navigation, collision avoidance and berthing.