In its weekly report for 30 June-6 July, ReCAAP ISC informed of two incidents of armed robbery against ships in Asia. Both were CAT 4 incidents that occurred onboard ships while underway in the eastbound lane of the Traffic Separation Scheme (TSS) in the Singapore Strait.

The first incident involves the Panamanian-flagged reefer vessel Frio Olympic, approximately 5.8 nm northwest of Tanjung Pergam, Pulau Bintan, Indonesia in the eastbound lane of the TSS in the Singapore Strait, on 2 July.

While the reefer vessel was en route to Dalian, China, an unknown number of perpetrators were sighted on deck. The master raised the alarm and the perpetrators escaped immediately.

Then, the crew conducted a search on board and discovered that four boxes of spare parts were stolen. There was no confrontation with the crew.

The incident was reported to Singapore Vessel Traffic Information System (VTIS). The ship confirmed no assistance was required and resumed her voyage. A safety navigational broadcast was initiated. The Republic of Singapore Navy's (RSN) Maritime Security Task Force (MSTF), Singapore Police Coast Guard and the Indonesian authorities were notified.

The second incident involved the Marshall Islands-flagged bulk carrier Cardinal, approximately 7.7 nm northwest of Tanjung Tondang, Pulau Bintan, Indonesia in the eastbound lane of the TSS in the Singapore Strait.

While the bulk carrier was en route from Singapore to Qingdao, China, on 28 June, four perpetrators were sighted in the engine room workshop.

Upon being sighted, the perpetrators escaped via the emergency steering room to the ship's stern deck.

A thorough search on board the ship was conducted twice with no further sighting of the perpetrators.

The markings found on ship railings at the stern indicated that the perpetrators had escaped using hooks and ropes. There was no confrontation with the crew and nothing was stolen.

The ship resumed voyage. The ship's CSO reported the incident to the Singapore Port Operations Control Centre (POCC). A safety navigational broadcast was initiated. The RSN, Singapore Police Coast Guard and the Indonesian authorities were notified. 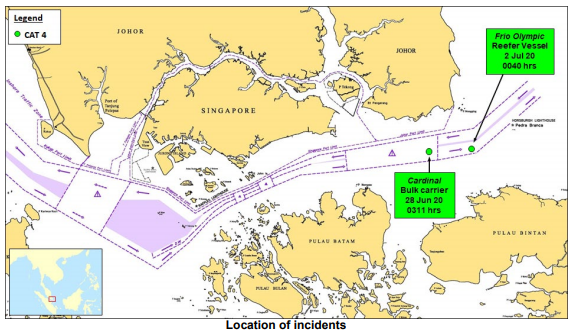 The report contains also reports of another two incidents outside Asia, in which a total of 14 crew members were kidnapped. Both incidents occurred on 2 July.

The first incident occurred on the FPSO 'Sendje Berge' while anchored at Okwori field offshore, Nigeria and the second incident on the general cargo ship Kota Budi while drifting in the Gulf of Guinea.