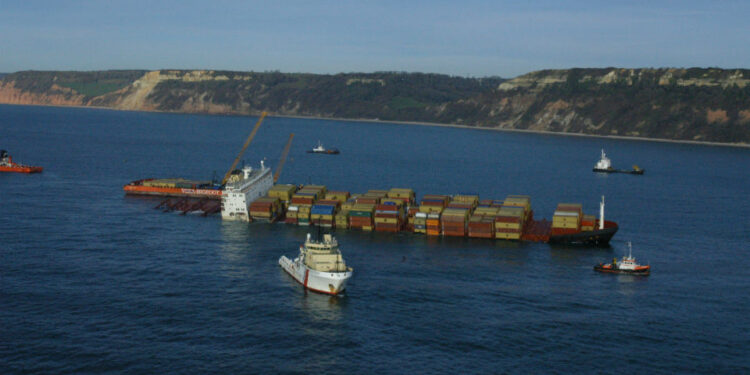 When a storm forced the MSC Napoli ashore at Dorset’s Jurassic Coast, it was the start of a £120 million salvage operation lasting 924 days. On January 18, 2007, the huge container ship was on passage in the English Channel when she got caught in stormy weather and suffered catastrophic hull damage. Lessons learned from the incident have led to advances in vessel design and safety.

The drama began on 18 January, when the Napoli, a 62,000 tonne container ship enroute from Antwerp to Durban, South Africa, ran into a violent storm off Britanny. The ship put out a distress call after suffering ‘catastrophic damage’ to its hull. All 26 crew were airlifted to safety in a rescue operation co-ordinated by UK coastguards.

Force 11 northerly winds made it impossible for the vessel to shelter along the French coast, so the French government asked the UK government if the crippled ship could be towed across the Channel into UK waters. The Napoli was still afloat, but listing badly.

With the storm showing little sign of abating, the UK government gave permission for the stricken vessel to be brought into territorial waters. The initial plan was to tow the ship to Dorset’s Portland harbour. But because of the risk of it sinking, it was decided to bring the vessel into the sheltered waters of Lyme Bay where it could be beached near Sidmouth.

So on the morning of 20 January 2007 the Napoli finally came ashore off Branscombe, the crack in her hull clearly visible near the ship’s bridge. Within hours, the latest ‘visitor’ to Dorset’s Jurassic Coast was front page news and thousands of sightseers descended on the picturesque village of Branscombe to get a close-up look at the vessel.

As the sheer scale of the operation became apparent, the government launched its National Contingency Plan for Marine Pollution. The Maritime & Coastguard Agency established a Salvage Control Unit (SCU) to deal with the salvage operation and a Marine Response Centre (MRC) to manage the pollution response at sea.

The UK MAIB  investigation has identified a number of factors which contributed to the failure of the hull structure, including:
• The vessel’s hull did not have sufficient buckling strength in way of the engine room.
• The classification rules applicable at the time of the vessel’s construction did not require buckling strength calculations to be undertaken beyond the vessel’s amidships area.
• There was no, or insufficient, safety margin between the hull’s design loading and its ultimate strength.
• The load on the hull was likely to have been increased by whipping effect.
• The ship’s speed was not reduced sufficiently in the heavy seas.

”The grounding of the Napoli was such an unusual event we had to be very innovative. We were fortunate in that the Environment Group was well supported by its partners, especially the MCA, Natural England and Public Health England.”