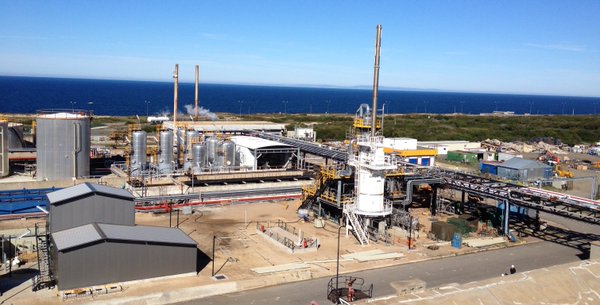 Vincent Favier, CEO, Ecoslops, explains the benefits of a unique technology to sustainably regenerate slops into valuable new fuels and light bitumen, which can be sold back into the market, creating a sustainable cycle.

The issue of slops disposal has recently gained increased international attention. In March 2016, the European Sea Ports Organisation (ESPO) placed port waste and ship waste as its fifth and sixth biggest priorities for the year ahead, and it’s not hard to see why. Large scale oil spills continue to encourage media headlines, reporting on the negative impact on the local environment, as well as the significant fines imposed; the recent $40 million penalty due from a high profile cruise line for illegally dumping slops being a case in point.

However, what many remain unaware of is that numerous smaller spills occur on a daily basis. Though the environmental impact is less, collectively they all add up. While some of these spills are accidental, caused by a problem with equipment or a vessel grounding, many are deliberate. In fact, the United Nations Environment Programme (UNEP) estimates that at least 3,000 incidents occur each year in which oily waters are deliberately discharged into European waters. When solutions for sustainable slop disposal are available, this deliberate discharge of oily waste is clearly unacceptable and unnecessary.

Slops and sludges are a hydrocarbon-rich industrial waste, produced in various parts of a ship’s operations, including tank cleaning, purifying fuels and use of ballast water. How much oily waste each vessel produces depends on its operations, the size of the vessel, its maintenance and age, as well as various other factors.

An estimated 90 per cent of the world’s goods are transported by ships, using a combined 400 million tonnes of fuel oil to function per year. The resulting waste material is substantial.

MARPOL Convention 73/78 and European Directive 59/2000 regulations have been put in place to safe guard the environment against this waste, however as we have seen, these rules are not always adhered to. As well as the record $40 million penalty, there has also been two other high profile slops dumping cases brought to court, which have hit the maritime headlines. The resulting charges have left the companies with significant fines, reaching up to USD$40,000,000, and crew facing felony charges for their part in the illegal discharge.

It would appear that the hard economic and commercial times the shipping industry is experiencing are forcing ship owners and operator’s hands when it comes to slops disposal. In more prosperous times, the construction sector provided a consistent market for slop collectors to sell to. The recent low cost of crude oil has encouraged these markets to invest in purer, virgin fuels. Slops are therefore building up in ports, many of which do not have adequate reception facilities to deal with the build-up, and  their slops tanks are becoming physically full.  Vessels still have to dispose of the slops, but they do not have the tank capacity or indeed the desire to keep the waste product on board.

To combat this, Ecoslops is the first company to develop a unique technology to sustainably regenerate slops into valuable new fuels and light bitumen, which can be sold back into the market, creating a sustainable cycle.

Based on a micro-refining process, the technology works in the following way: firstly, to optimise distillation, the slops are pre-treated. They are heated, decanted and using high-speed vertical centrifugation, the water, hydrocarbons and sediments are separated before the refining and distillation process. As the reprocessing of the water from the slops is fully integrated within the treatment process, the water is then depolluted using the latest techniques. The water is returned to its natural environment in line with relevant environmental laws. After the water and sediment are removed, the slops are sent to the P2R vacuum distillation column, where they are heated. Under vacuum conditions, the hydrocarbons and heavy molecules are vaporised and at the end of the distillation process several fuels are produced, including naphtha, fuel (GO and IFO) and light bitumen.

For ports, which are struggling with the influx of slops, it takes away the hassle of disposal, and regenerating slops rather than burning them reduces pollution in port communities. It also helps ports to improve their environmental profile, and enhances their competitiveness and reputation at a time where sustainability within shipping is viewed as a real premium. Ship owners are reassured that their waste is treated appropriately and at the right cost, and they can also improve their reputation by creating a sustainability cycle for their slops, reusing the fuel produced by the industrial unit. Traditional slops collectors also benefit as Ecoslops purchases the product at a fair price, and it alleviates the pressures on storage capacity.

In 2015, Ecoslops’ first micro-refinery in the Port of Sinès commenced industrial production, and to date over 17,000 tonnes of slops have been successfully regenerated into fuel oil, and sold back into the fuel supply chain. Ecoslops has also announced that it is on track to meet its annual target of producing at least 30,000 tons of regenerated slops in 2017 from the Port of Sinès.

Building on this success, and the third-party verification of its technology and business model, in September 2016, Ecoslops signed a memorandum of understanding with Total, the international oil and gas company, to establish a slops processing plant within the refinery in Le Mede, Marseille. The aim of this unit will be to process slops unloaded in the Port of Marseille and neighboring ports. In addition to this significant collaboration, Ecoslops has continued to develop other projects, particularly in Northern Europe, and is reiterating its objective of signing deals for three new sites by the end of 2017.

Although the issue of slops disposal may only reach the headlines when there is a high profile spill, it should not mask the significant challenge the industry faces.  However, through new innovations that are now available, such as Ecoslops’ technology, ship owners and operators now have a real choice in choosing compliance, and ensuring the legal and sustainable disposal of slops.

The views presented hereabove are only those of the author and not necessarily those of GREEN4SEA and are for information sharing and discussion purposes only.

Mr. Vincent Favier has been heavily involved Ecoslops since its inception, bringing with him an in-depth knowledge of the industry before becoming CEO of Ecoslops in 2015. Before joining Ecoslops, Mr Favier had been in charge of investments for Tikehau Capital Advisors for two years and has a solid experience in renewable energies, infrastructure projects and building up new businesses. Having graduated from HEC Paris and l’École Centrale de Lyon, he began his career in strategy consulting at Oliver Wyman, where he remained until 1999. Mr. Favier joined Tikehau Capital Advisors in 2013 and became a Director of Investments and Equity Interests and Investment Director there.