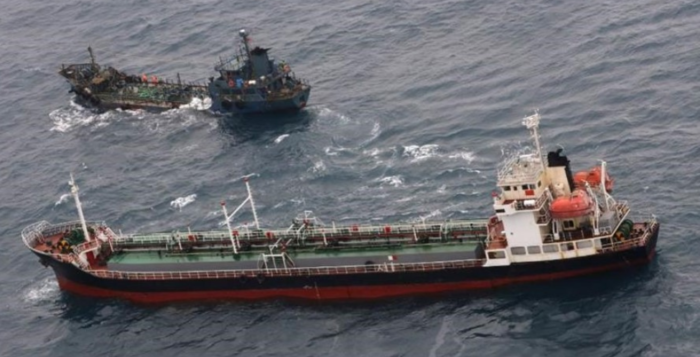 The North Korean-flagged tanker Saebyol, which was transmitting as a fishing boat, was spotted alongside a vessel of unknown nationality on the high seas, conducting a prohibited ship-to-ship transfer as the Royal Navy reported.

The two vessels were spotted on March 2, by a Royal Navy frigate which was operating in the East China Sea in cooperation with Japan, enforcing the UN sanctions against North Korea.

The evidence of the illegal operation was gathered and then sent to the United Nations.

Japan’s Ministry of Foreign Affairs noted that the the United Nations Security Council designated Saebyol as a vessel subject to assets freeze in March 2016.

In light of the incident, Gavin Williamson, the UK Defence Secretary commented

Sanctions evasion helps facilitate North Korea’s nuclear weapons program and is a major source of funding. Sanctions will remain in place and we and our partners will keep enforcing them until we see concrete steps towards North Korea’s complete, verifiable and irreversible denuclearisation.

Another similar incident took place in May 2018, when another Royal Navy vessel saw and then reported a Panama-flagged vessel that was conducting a ship-to-ship transfer with a North Korean-flagged vessel.

As a result, the Panamanian vessel was designated by the UN, deflagged and then banned from port entry.

North Korea is conducting increased sanctions, after several tests of nuclear warheads in 2016 and 2017. In September 2017, U.S. President Donald Trump issued an executive order on imposing additional sanctions against the country.

On March 2019, OFAC, along with the U.S. Department of State and the U.S. Coast Guard updated the North Korea shipping advisory.