In its weekly report, 26 November – 2 December, ReCAAP ISC discusses three incidents which took place in Asia. Two of the three were CAT 3 incidents, and occurred when the ships were underway in the eastbound lane of the Singapore Strait; The remaining one was a CAT 4, while the vessel was anchored in Batangas, Philippines.

The time of the attack, the vessel was northeast of Pulau Tanjung Buntung Besar, Indonesia, in the eastbound lane of the Traffic Separation Scheme (TSS) in the Singapore Strait

The duty oiler while collecting engine spares at the steering gear room was confronted by five perpetrators. He was grabbed and had a knife pointing at him. He managed to escape heading to the engine control room. The Master reported that all crew were accounted for and there was no further sighting of the perpetrators on board.

In light of the incident, the ship’s alarm was raised, the crew mustered and a search was carried out on board. Yet, the perpetrators were not found onboard.

Nothing was stolen from the vessel and the ship didn’t ask for additional assistance. 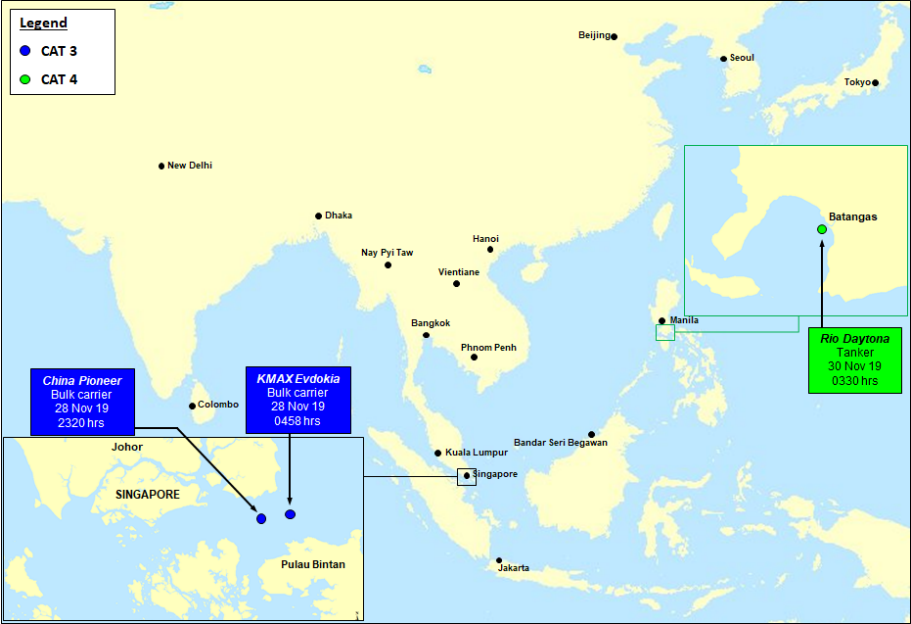 The second incident focuses on an attack which took place onboard “China Pioneer Bulk Carrier”, on November 28, 2019.

Similar to the incident above, the vessel was northwest of Pulau Tanjung Buntung Besar, Indonesia, in the eastbound lane of the TSS in the Singapore Strait.

The chief engineer saw the four perpetrators in the engine room on the 2nd deck level, with one being armed with a knife about 50 cm long. In sight of the incident, the chief engineer immediately reported it tot he master who activated the vessel’s alarm and deck lightings.

When the alarm sounded, the perpetrators departed the vessel. The crew was mustered at the bridge and a search conducted on board. All crew was safe and nothing was stolen. The ship departed Singapore for Majishan, China.

The third incident presents another attack onboard “Rio Daytona” tanker, on November 30, 2019.

The vessel was anchored on Tabangao, Batangas, Philippines. Two perpetrators boarded the vessel through the hawse pipe and stole one piece of fire nozzle, one piece of fire hydrant cover and five pieces of butterfly bolt from bosun store hatch. They immediately escaped when the duty officer noticed them.

The crew informed the master, raised the ship’s general alarm and conducted check on the inventory of the ship’s property.

ReCAP ISC, in a recently launched report concerning the first none months of 2019, expressed concerns about the increase in the number of incidents reported onboard ships while underway in the Singapore Strait.