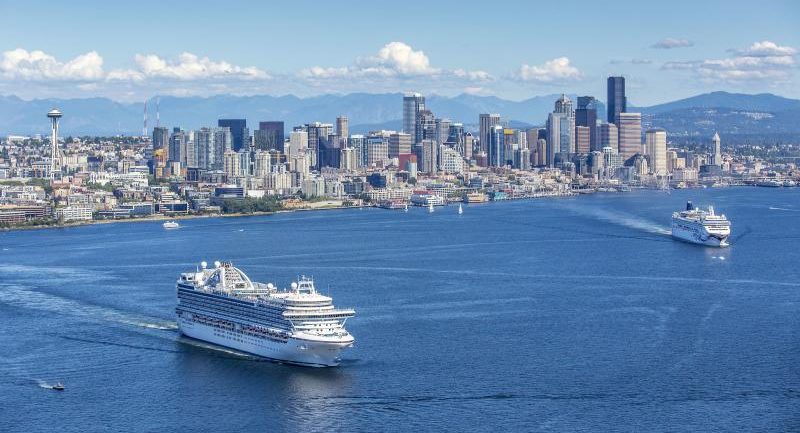 The Port of Seattle Commission issued a Request for Qualifications (RFQ) to secure a partner to develop and operate a new, single berth cruise facility at Terminal 46. Commissioners also adopted principles to ensure that a growing cruise business increases local economic benefit and maintains the Port’s leadership as the most environmentally progressive cruise homeport in North America.

The cruise terminal RFQ is the first step in a partnership selection process that will support the completion of a new facility for the 2022 cruise season. Early estimates are that a cruise terminal could be constructed for around $200 million. A public-private-partnership approach to build the terminal will have the Port contributing half that cost. Responses to the RFQ are due April 18.

Our principles ensure that this new cruise terminal will expand local economic benefit, and with the addition of our third shore power berth will make Seattle the national leader in promoting clean, electric shore power for our Alaska-bound cruises,

The opportunity to explore using 29 acres at the north end of Terminal 46 for a new cruise terminal and single berth has come forward now as the Northwest Seaport Alliance works to realize its strategic plan of realigning international maritime cargo operations at Terminal 5 near West Seattle and Terminal 18 on Harbor Island.

The cruise terminal project is contingent on the successful authorization of a new lease at Terminal 5 which is scheduled for review at the Northwest Seaport Alliance’s March 19 meeting.

This year, the Port celebrates 20 years of service as a cruise homeport. The Port of Seattle’s cruise program supports statewide efforts to expand tourism-related economic activity, which is the fourth-largest industry in Washington.

The Port of Seattle is also the first and only cruise homeport in North America with a voluntary clean water agreement between cruise lines and regulators. Emissions from ocean-going vessels, including cruise ships entering Puget Sound, have decreased by more than 67% over the last 10 years.

Preliminary capital planning estimates that this project could be delivered at approximately $200 million. A public-private-partnership will have the Port funding around $100 million.

The Port of Seattle Commission approved a funding plan for this project in its 2019-2023 budget blueprint in November 2019. The five-year plan included some of the most significant and forward-looking maritime investments the Port has made in a generation, each one strategically designed to build up the industries where Seattle’s competitive advantages intersect with global growth trends.

At this very early stage of the project, the Port is aiming for a partnership selection process that could support possible completion of the project as early as 2022 cruise season. Community outreach meetings, open houses, and tours will begin this spring and continue through project construction.