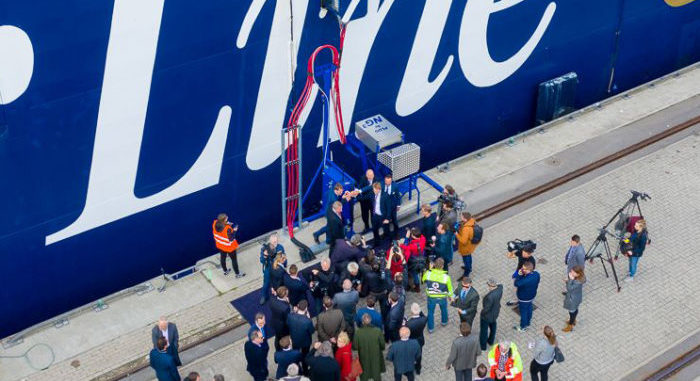 At the inauguration ceremony on 9 May / Credit: Siemens

The German Port of Kiel officially inaugurated its first shore-based power supply plant for ships at the Norwegenkai terminal, on 9 May. With immediate effect, the Color Line’s big cruise-ferries can now be supplied with emission-free electric power from on shore.

Minister-President of the federal state of Schleswig-Holstein, Daniel Günther, the German Federal Government’s Coordinator for the Maritime Industry, Norbert Brackmann, and the Lord Mayor of Kiel Dr Ulf Kämpfer along with Dr Dirk Claus, the Managing Director of the Port of Kiel and Trond Kleivdal, Board Chairman of the Color Line, jointly declared the facility open.

We are together making an important contribution to keeping the air clean. By using power from on shore we are reducing to zero the emission of harmful substances as well as of greenhouse gas-es during the time ships are berthed in the port. Schleswig-Holstein supports this trend-setting project and will encourage further facilities of this type,

...Minister-President Günther stated on the occasion.

The building contractor for the shore-based power plant, which was built by Siemens, is the PORT OF KIEL. Investment in the plant totaled €1.2 million, of which €400,000 was funded by the state of Schleswig-Holstein.

The move is in line with the city's goal to become carbon neutral by 2050, noted Kiel Lord Mayor Ulf Kämpfer.

In future we want to be in a position to use shore-based electricity to cover 60% of the power requirements of ships calling at Kiel. That will mean we will be able to count our-selves among the most eco-friendly ports in Europe,

Schwedenkai Terminal and the cruise shipping terminal at Ostseekai will follow the Norwegenkai example and are to get shore-based power supply capability for ships in the coming year.

The ships of Norway’s Color Line – “Color Fantasy” and “Color Magic” - link Kiel with Oslo on a daily basis, with an annual power requirement in Kiel of about four million kilowatt hours.

The ships are already appropriately equipped for shore power and have been plugged in on- shore in Oslo since 2011 and in all four Norwegian ports since 2017, noted Color Line Board Chairman Trond Kleivdal.

The Siemens onshore power plant at the Norwegenkai has a maximum connection capacity of 4.5 Magawatts (MW) at 10 Kilovolt (KV) and a mains frequency of 50 Hertz (Hz).

Shore power supply, also known as cold ironing, is seen as a significant move for reducing emissions while ships are at port. Some of the ports having introduced shore power are the US Port of Los Angeles, Port of Long Beach, Port of Seattle, Port of Antwerp, while Greece's Port of Killini recently inaugurated the first shore-to-ship (STS) electrical supply connection in Eastern Mediterranean.