Marine debris, according to NOAA’s Marine Debris Program, is:

Any persistent solid material that is manufactured or processed and directly or indirectly, intentionally or unintentionally, disposed of or abandoned into the marine environment or the Great Lakes

In September of 2017, Hurricane Irma struck the Florida Keys, damaging homes, sinking vessels, and scattering debris into the marine environment. Among the land-generated debris, the hurricane also displaced and damaged more than half of the Florida spiny lobster fishing gear and traps set out in the water when the hurricane passed through. This lost and damaged fishing gear from the hurricane, along with chronically lost gear and other forms of marine debris, poses a high risk for damaging critical benthic habitats like reefs and seagrass beds and can entangle and harm corals, sponges, dolphins, manatees and sea turtles.

While hurricanes and large storms can significantly displace or damage traps, trap loss is a recurring and prevalent issue in the Florida Keys.

Lost traps and trap rope damage critical benthic habitats such as reefs and seagrass beds and can entangle and harm corals, sponges, dolphins, manatees and sea turtles. Trap loss is also an economic concern. When traps become lost, fishermen lose the cost of the gear and the value of future catch. When traps entangle navigational aids or block channels, the aids can become obstructed or damaged and boats may be forced to stray outside marked channels into shallow water, causing further injury to sensitive habitats.

Removing underwater marine debris and fishing gear restores, protects, and enhances marine habitats and ecosystems within Florida Keys National Marine Sanctuary for the species that rely on them; supports a robust, sustainable tourism industry; and prevents future damage through entanglement, abrasion, and breakage to a myriad of species, including: Endangered Species Act-listed corals such as Elkhorn (Acropora palmata; endangered), Staghorn (A. cervicornis; endangered) and Boulder Star Coral (Orbicella franksi; threatened). 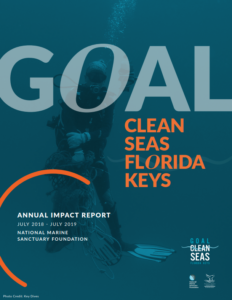