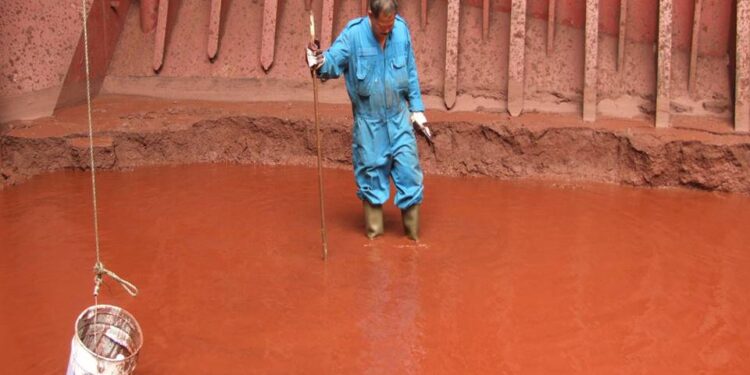 The impact of a bulk cargo liquifying whilst at sea can have catastrophic consequences as seen in a number of recent high-profile casualties, argues Carl Durow, Loss Prevention Manager, London P&I Club. The role of the P&I Club is to provide insurance against such events but also to provide advice to prevent them for occurring in the first place. Doing this, saves lives and helps protect the natural environment.

Although the IMO provides the official regulations and guidance notes on cargo liquefaction, P&I Clubs such as The London P&I Club offer complementary advice to ship’s masters to raise awareness of the issue and to suggest practical steps to reduce the danger.

IMO has identified 75 bulk cargoes that have the potential to liquefy under certain conditions – these are known as Group A cargoes. If the Moisture Content (MC) of a Group A cargo exceeds the Transportable Moisture Limit (TML) then vibration and the motion of the vessel might cause that cargo to behave as a liquid rather than a solid when it is being transported in the hold. When in liquified form, and in a heavy sea, the cargo can easily flow from one side of the hold to the other. This affects the vessel’s stability and can lead to a vessel capsizing. Therefore it is vital that the crew are fully aware of this issue and are able to spot warning signs as early as possible.

Most importantly, the master must be confident that the cargo to be loaded into his ship is safe. Prior to loading a Group A cargo, the actual MC and TML must be determined by an accredited scientific laboratory in accordance with the IMO regulations. The master must be in receipt of a valid, signed certificate stating that the MC is less than the TML. Even if the master has been presented with a valid certification, he/she should be aware of the prevailing climatic conditions, such as a prolonged period of rain or snow after the test has been performed, which might have significantly altered the MC of a cargo that has been left unprotected.

How to ensure optimal efficiency of purifiers onboard

Watch: How can personal mobile devices affect attention onboard

As an additional precaution, the master should carry out his/her own inspection using the “can test”. Examining the results for free moisture or fluid won’t definitively show that the moisture content of the cargo is less than the Transportable Moisture Limit (TML) but may indicate that the cargo has exceeded its Flow Moisture Point (FMP). Can tests should be performed regularly during the loading process and the results photographed and recorded.

If the master is not in receipt of a valid certificate, or if the can test results are concerning – or if he/she is prevented from taking a sample – then loading operations should be stopped.

During loading operations, the master should continue to visually inspect the cargo and try to prevent any excess water from entering the holds. If it is raining hard, then a further test to check that the MC has remained below the TML should be carried-out. In some circumstances it might be appropriate for the master to request the attendance of an experienced, independent cargo surveyor.

At any point, if the master has reason to suspect that the MC has exceeded the TML then he/she must stop loading and inform the vessel owner. In addition, the master has the right to issue a “Letter of Protest” and seek further advice from the P&I Club.

It is important for all Group A cargoes to be closely monitored throughout the voyage even if the master was satisfied during loading. Holds should be inspected for excess moisture – taking care to comply with all guidance on safe entry of enclosed spaces, of course. Cargo hold bilges should be sounded regularly and additional ventilation introduced as necessary. The crew should also be aware of the general motion of the ship as changes can occur if the cargo is beginning to change state. If the master is concerned, he/she should attempt to reduce the vessel’s vibration; contact the nearest coastal state authority; consider heading to the nearest port or place of refuge; and contact the P&I Club.

The issue of liquefaction is well known which is why the IMO has implemented regulations. If the regulations are followed, then ships and their crew should remain safe. But sometimes, circumstances will conspire to allow an unsafe cargo to be loaded on board; or a cargo that was previously certified as safe to morph into something less safe. Ultimately, it is the vessel and her crew that will suffer and so it is vital that the master has the authority and training to identify a potentially concerning cargo and the capability to deal with it effectively.

More information is available from The London P&I Club, by clicking here