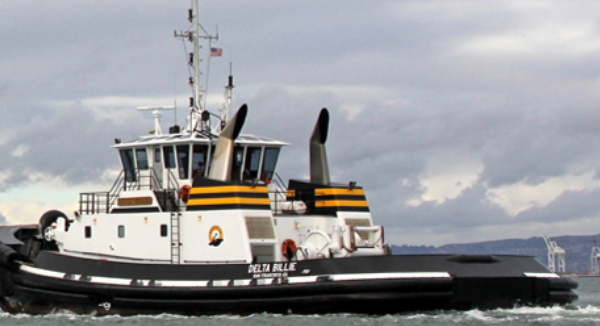 Above image is used for illustration purposes only / Credit: Baydelta Maritime

Jensen Maritime was ordered to design a new 100-foot, Z-Drive hybrid tugboat for Baydelta Maritime. The company will use Rolls-Royce hybrid technology and it will be the first hybrid tug designed by Jensen to enter the construction phase.

The hybrid tug is planned to be delivered in the first quarter of 2019, and will feature the same ship assist and tanker escort capabilities of existing Valor class harbor tugs, but with additional operational modes.

The new hybrid system by Rolls-Royce enables the vessel to operate direct-diesel, diesel-electric or fully-electric while assisting the large containerships and tankers operating in US West Coast ports.

This is expected to save fuel and reduce emissions. Moreover, the new system will allow loitering and transit at up to 7-8 knots in electric-only mode, then a bollard pull of 90, or nine short tons, in combined diesel-electric mode.

"The tug will have eight berths, and the major equipment on board will include a Rapp Marine electric hawser winch and a single drum tow winch. The tug is designed to carry up to 71,000 gallons of fuel and 4,300 gallons of fresh water," Jensen Maritime said.