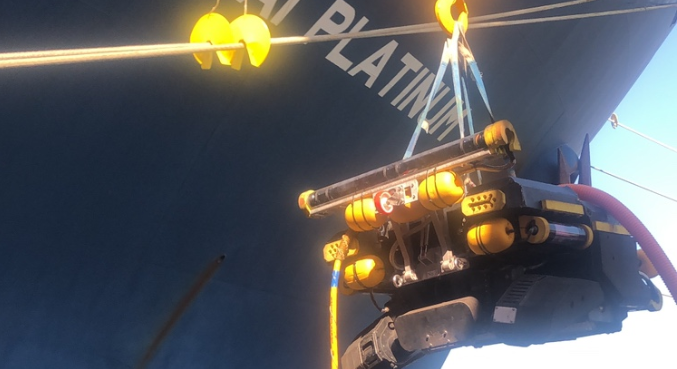 A underwater robot is deployed to clean the hull of the 5,000-TEU container ship M/V Hyundai Platinum / Credit: HMM

As part of these plans, HMM signed a cooperation agreement with TAS Global, a South Korean manufacturer specialising in underwater robots.

Hull fouling, such as barnacles, seaweed, moss, etc. is widely known to decrease the speed of vessels and increase fuel consumption by creating additional friction.

In response, underwater hull cleaning is typically performed by divers sent down under a vessel, as shipping companies try to improve fuel efficiency.

The diver-free alternative adopted by HMM is expected to not only prevent industrial accident but also contribute to protect ocean life.

Specifically, several countries are currently prohibiting in-water cleaning of vessels in their waters due to the high risk of aquatic invasive species(AIS) being easily transferred across the oceans as well as toxic hull paints which jeopardise marine ecosystem.

However, underwater robots are designed to capture hull fouling and transfer it to shore refining facilities through a filtration system connected to their main body.

In addition, this robotic technology is expected to lower costs by as much as 40% with reduced working hours and to perform a more precise cleaning process without damage to hull coatings.