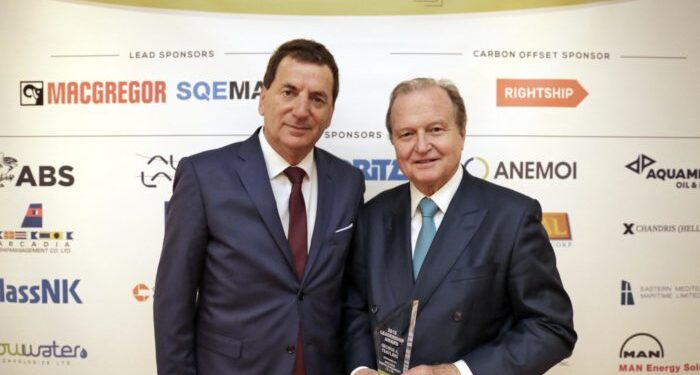 SAFETY4SEA is pleased to announce that Mr. George Tsavliris, CYMEPA has received the 2019 GREEN4SEA Leadership Award, sponsored by Arcadia Shipmanagement, at a prestigious award ceremony which successfully concluded on March, 12th at Yacht Club of Greece in Athens, the evening ahead of the 2019 GREEN4SEA Conference. Mr. George Tsavliris, Chairman, CYMEPA received the award for his leadership role within CYMEPA and other national and international Associations.

Presenting the award Capt. Dimitris Mattheou, CEO, Arcadia Shipmanagement said “Leadership is about impact, influence and inspiration. Impact in force implementation and getting results with plan; influence is about spreading the knowledge you have for your work and inspiration reflects to actions oriented to excellence. However, I believe that a supreme quality for leadership is integrity and quality of being honest and having strong moral rights and George is gifted with all these features.”

Accepting the award Mr. Mr. George Tsavliris, Chairman, CYMEPA, stated “To be considered a leader, the first prerequisite is to recognize the deficiencies, your weaknesses and to have the ability and the stamina to share those ingredients with the others around. Many times, in my career I had to define logic and go against the system. Leadership is a funny term. What is leadership without team? As Benjamin Graham said “Every day when I wake up, I want to achieve three things to that day: I want to do something foolish, I want to do something creative and I want to do something generous.” Nothing can be achieved without patience, passion and perseverance.”

Mr. George A. Tsavliris was born in London. He graduated from Athens College in 1968 and having acquired professional qualifications in Shipping, he concluded his graduate and post graduate studies in Shipping Law at University College London in 1973. In 2009, he was qualified as a Mediator at the ADR Group London and in 2014 was certified as a Mediator by the Greek Ministry of Justice, Transparency and Human Rights. Mr. George Tsavliris is a Principal at ‘Tsavliris Salvage Group’ and represents the business on both a commercial and environmental basis internationally. He holds the position of Past Chairman of INTERMEPA and Chairman of CYMEPA. Also, he is Board Member of ECSA, Board Member of The Yacht Club of Greece, Board Member of Friends of Hellas Liberty Association and the Jubilee Sailing Trust in the UK and Honorary Chairman of the Tsavliris Cultural Foundation.  Furthermore, Mr. George Tsavliris has taken on the role of Academic Director of Metropolitan College / Solent Southampton University. Mr. George Tsavliris is a frequent keynote speaker and panelist at numerous maritime related conferences and an avid supporter of various charities.

This is a special category award for any individual person that provided industry leadership and contributed toward smarter shipping throughout his/her career, after consideration and review of a list of “Editor’s Pick” nominees by the SAFETY4SEA Team. GREEN4SEA Awards are held annually within the scope of awarding industry’s outstanding practices for green shipping excellence, technology, initiative, clean shipping practices, green ports and personalities that are leading the path toward a more sustainable future. Other winners of the 2019 GREEN4SEA Awards are: Blue Planet Shipping Ltd for the Dry Bulk Operator Award, Navigator Gas LLC for the Tanker Operator Award, MAN Energy Solutions for the Technology Award, International Windship Association (IWSA) for the Initiative Award, Clean Shipping Association 2020 (CSA2020) for the Clean Shipping Award, Port of Valencia for the Port Award and Mr. Panos Zachariadis, Atlantic Bulk Carriers for the Leadership Award.

Find photos from the awards ceremony at Flickr and explore more about the nomination & voting procedure and the winners of 2019 GREEEN4SEA Awards at https://events.safety4sea.com/2019-green4sea-awards/