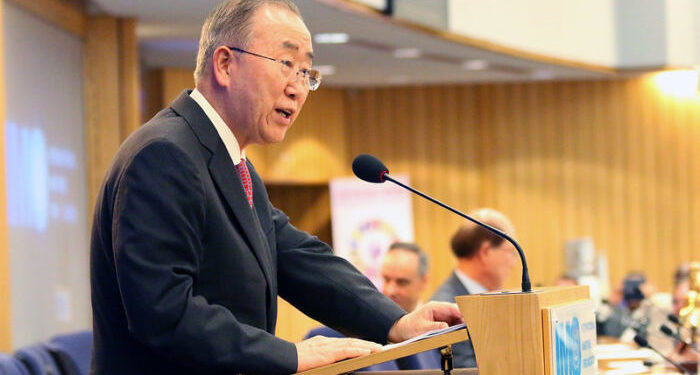 The Former UN Secretary General, Ban Ki-moon, highlighted that the shipping industry has to focus on achieving the targets set in the United Nations Sustainable Development Agenda and fight climate change, going against unilateralism.

Mr Ban applauded IMO’s efforts on tackling climate change, including the adoption of the initial IMO GHG strategy, as well as the Organization’s work, including capacity building, to promote a safer, more secure and more environment-friendly shipping industry.

In times of increasing discord, I believe that achieving the UN SDGS and meeting the Paris Climate Change Agreement are two efforts that should unite all nations, all industry and all civil society.

His words against unilateralism are similar to IMO’s Secretary General, Kitack Lim, who noted that collaboration is the key to succeed the 2020 sulphur cap, urging all shipping stakeholders from the different sectors to unite.

Moreover, Mr Ban praised IMO’s 2019 World Maritime theme in support of women in shipping, as he also established UN Women to champion gender equality during his time as UN Secretary-General. Companies with women on their boards do better, he reminded the audience – while women and children are disproportionately affected by the impacts of poverty, climate change and conflict.

We need an all hands on deck approach where everyone joins together in multi stakeholder partnership. Considering the great importance of the shipping industry for our economies and the environment, IMO truly represents the vanguard of global efforts to build a more prosperous and sustainable global future.