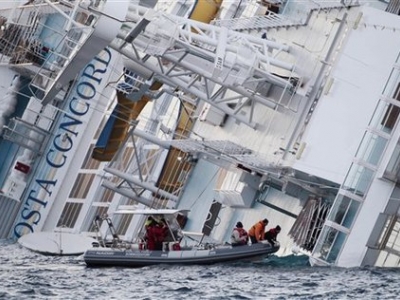 Rescue crews have blasted holes in a stricken cruise ship in order to gain easier access as hopes fade of finding survivors among the 29 people missing.

Six people are known to have died after the Costa Concordia crashed into rocks off Italy's west coast on Friday night.

The ship's owners have blamed the captain for Friday's crash, saying he changed course towards an island.

Capt Francesco Schettino has been detained on suspicion of manslaughter and is due to appear shortly in court.

Capt Schettino, 52, has also been accused of abandoning his vessel before all the passengers had been evacuated.

He is to answer questions from a magistrate who will decide if he is to remain in custody.

Italy says it will declare a state of emergency over the incident, and provide funding to help avert any environmental disaster.

The Italian environment minister said liquid was leaking from the ship, but it was unclear if it was fuel.

Meanwhile, Italian officials have denied a newspaper report that a seventh body had been found overnight on the vessel.

Shortly after daybreak on Tuesday rescue crews blasted several holes in the ship, now lying on its side metres from Giglio island, off the Tuscan coast, in order to gain access to areas they have not been able to search.

Italian coastguard officials said the number of people believed to be missing had jumped to 29 from the previous estimate of 16, but gave no reason for the change.

The missing are thought to include four crew members, as well as passengers from the US, Germany, France and Italy.

On Monday, the Costa Concordia's owners, Costa Cruises, said Capt Schettino hit the rocks because he deliberately steered the ship towards Giglio Island.

Prosecutors also claim that he was responsible for the disaster. They say the captain wanted to make a close pass of Giglio in order to "salute" a crew member's family who live there.

"The captain is in a very difficult position because we are sure enough that he abandoned the ship when many passengers were still waiting to be evacuated," said prosecutor Francesco Verusio.

A transcript purportedly of conversations between the captain and the coastguard has emerged in the Italian media - apparently drawn from one of the ship's black box recorders - which appears to corroborate the claims that the captain left the ship before all the passengers escaped.

Capt Schettino has denied wrongdoing and says the rocks were not on his charts. He has insisted that he and his crew were the last people to leave the vessel.

His lawyer, Bruno Leporatti, said his client was "overcome and wants to express his greatest condolences to the victims", adding that the captain had carried out a dangerous manoeuvre that had actually saved lives.

The ship, carrying 4,200 passengers and crew, had its hull ripped through when it hit rocks late on Friday.

Some people were forced to swim for land as the angle of the ship made boarding lifeboats impossible.

Italian officials said 10 German passengers were among the missing, along with two Americans, six Italians, two French couples and a Peruvian.

Teams of specialist divers have been helping with the rescue mission, but they have been hampered by bad weather, which has been moving the ship in the water.

Rodolfo Raiteri, head of the coast guard's diving team, was quoted by news agency AFP as saying that conditions inside the vessel were "disastrous".

"It's very difficult. The corridors are cluttered and it's hard for the divers to swim through," he said.

Saturnino Soria, father of Peruvian Erika Soria, who was working as a waitress on the ship, insisted that the search operation should continue.

"I haven't received any precise information about her - nothing from yesterday or today - it seems the situation has become worse for my daughter," he said.

"You never know in the labyrinth of that ship. An air pocket could have allowed people to survive a few days," Sergio Ortelli was quoted by AFP as saying.

Meanwhile, the shipping newspaper Lloyd's List said it had been able to trace the course of the Concordia though information from satellites.

The paper issued a graphic comparing Friday's sailing with an earlier sailing by the liner, suggesting that Friday's route had deviated far from its usual course.

Worries are growing that the ship could cause an environmental disaster if it breaks up and sheds its fuel.

The vessel had just left the port of Civitavecchia, north of Rome, carrying roughly 2,300 tonnes of fuel for a week-long Mediterranean cruise when it crashed.

The area where the ship capsized is a maritime park famous for its pristine waters, varied marine life and coral.

Italian Environment Minister Corrado Clini said there was evidence that liquid was leaking from the ship, but he could not confirm whether the fluid was fuel.

He said the government would declare a state of emergency to release extra funding to help avoid a fuel spill causing an environmental disaster.

A man involved in the operation to remove fuel from the Costa Concordia told the BBC's Matthew Price that the ship was stable, and that some movement was normal.

He said there was no sign of fuel leaking and that they hoped to begin pumping oil from the ship by Thursday or Friday.