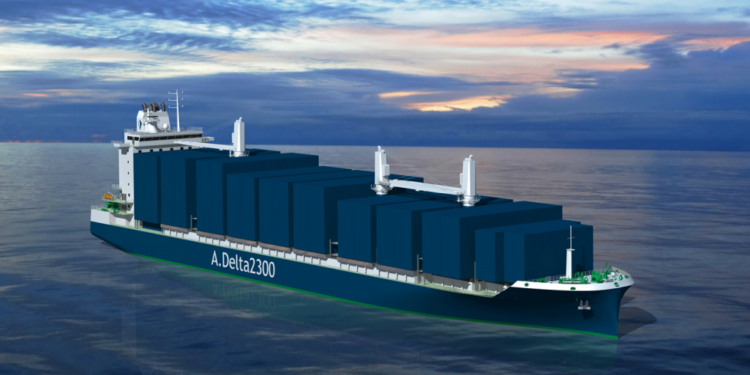 Above image is used for illustration purposes only. Credit: Deltamarin

Deltamarin announced that Icelandic Eimskip Ltd and Greenland-based Royal Arctic Line A/S ordered the first three container vessels from its energy-efficient cargo ship family. The ships will be built at the Guangzhou Wenchong Shipyard in China, with which Deltamarin (China) Co., Ltd has signed a design contract.

According to the company’s statement, the 2,150 TEU container vessels are highly fuel-efficient and environmentally-friendly are capable of sailing even in Arctic waters, as they will have an ice class and comply with the newly adopted IMO Polar Code. They are also expected to comply with IMO NOx TIER III requirements and, due to the built-in scrubber system, to minimize sulphur oxide (SOx) emissions.

“We are very proud of this new contract, which further confirms our expertise in cargo ships. The design is based on Deltamarin’s extensive development work for a new generation of energy-efficient and operationally optimised 1,000-3,000 TEU container vessels intended for feeder service,” says Markku Miinala, Director, Sales and Marketing at Deltamarin.

The work will be carried out at Deltamarin’s Shanghai office in China over an estimated period of eight months.