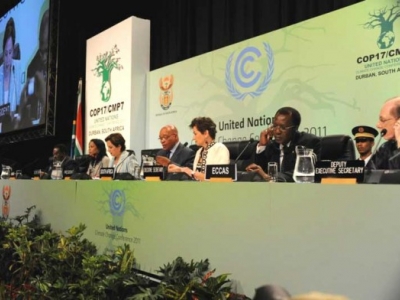 At the United Nations Climate Change Conference in Durban, South Africa (COP 17, Nov. 28 to Dec. 9, 2011), the global shipping industry, Oxfam and WWF have joined forces to suggest to governments how the further reduction of greenhouse gas emissions from international shipping might best be regulated.

Oxfam, WWF and the International Chamber of Shipping (which represents over 80% of the world merchant fleet) call on delegates to COP 17 to give the International Maritime Organization (IMO) clear guidance on continuing its work on reducing shipping emissions through the development of Market Based Measures (MBMs).

The organisations maintain that an effective regulatory framework for curbing emission of CO2 from international shipping must be global in nature and designed so as to reduce the possibility of 'carbon leakage', while taking full account of the best interests of developing countries and the UNFCCC principle of 'common but differentiated responsibilities and respective capabilities' (CBDR).

This includes the possibility of the adoption by IMO of a compensation mechanism through which a significant share of any revenues collected from international shipping could be directed to developing countries and provide a new source of finance to support their efforts to tackle climate change. Such revenues could be directed through an appropriate channel, such as the Green Climate Fund, which will be discussed by governments in Durban.

While there are some differences over the detail of such an approach, both the civil society and shipping industry organisations emphasise that the immediate priority for governments meeting at COP 17 in Durban is not to work on technical details for shipping, but to provide the signals needed to allow resolution of the key political question of how to apply CBDR in the shipping sector, and assist the speedy completion of the IMO's work.

With respect to any carbon charges that might be proposed by governments, they agree that the recent IMO agreement on technical and operational measures to reduce shipping emissions demonstrates that the IMO is eminently capable of developing a further international agreement for shipping on MBMs. In light of the urgency required to avoid catastrophic climate change, they called on all governments to take all steps necessary to expedite such an agreement at the IMO.

"We are very pleased that the shipping industry acknowledges its responsibility to play its part in further reducing greenhouse gas emissions. With around 3% of the world's total emissions, full participation of the shipping sector will help greatly towards keeping global warming below the 2C target agreed by governments. Putting a charge on carbon in the global shipping sector can have huge benefits in meeting our climate change objectives."

"We agree with shipowners that the best place to work out the details of how shipping's emissions can be tackled using Market Based Measures will be at the International Maritime Organization, and that a strong political signal by political leaders in Durban showing their determination to make progress on this will help accelerate that process."

"We welcome the constructive engagement of the shipping industry in the search for solutions to the climate crisis. Industry and civil society actors agree that shipping emissions can be regulated in a way which is fair to developing countries and could help generate the resources they need to tackle climate change."

"It's vital that governments meeting this month at the UN climate talks in Durban give the signal needed to move such a deal forward in the International Maritime Organization".

"The shipping industry welcomes the recognition by these important actors from the environment and development fields that it is in the best interests of both the environment and developing nations for shipping to be regulated via our industry regulator, the International Maritime Organization, with the same rules for carbon reduction applying to all internationally trading ships, but in a manner which respects the principles of the UN climate convention."

"If governments decide that shipping should contribute to the UNFCCC 'Green Climate Fund', the industry can probably support this in principle as long as the details are agreed at the IMO, with the industry's clear preference for a Market Based Mechanism being a compensation fund linked to the fuel consumption of ships, rather than an emissions trading scheme."