The growing imports of loaded containers into the US East Coast (USEC) continue to be a focal point for the container shipping industry, according to BIMCO. Growing by 10.4% in Q1-2018, the first three months saw 215,000 TEU more entering the USEC than in Q1-2017. Exports grew by 55,000 TEU in the same time span, growing outbound loaded containers by 3.8%.

Despite the positive demand growth, freight rates have lost traction. The broad-based China Containerized Freight Index (CCFI) which covers ten major Chinese ports and includes not only spot rates, but also long-term contracts are down by 5% on average for China-USEC trades and down by 7% on average for China-USWC for the first 18 weeks of 2018. If singled out, the decline in spot rates alone is much deeper, as the USEC is down by 18% and USWC dropped 22% for the first 18 weeks of 2018 as compared to the same time last year. 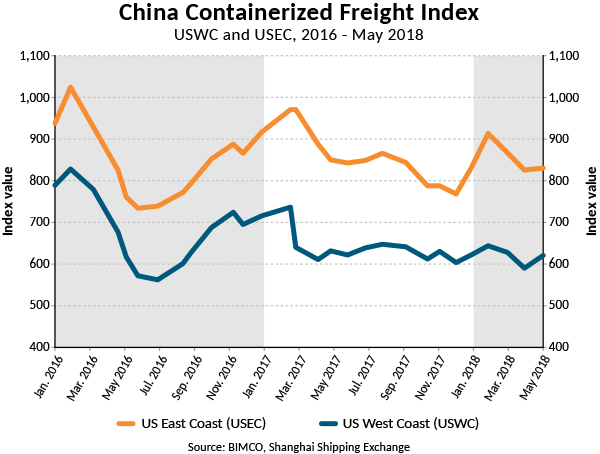 Similar worrying signs are seen in the Far East to Europe trade. CCFI is down by 3% on average as compared to last year, whereas the spot rates (SCFI) have slid 15%. The latter was quoted at USD 584 per TEU for the week ending 20 April, but rebounded to USD 825 per TEU at the end of May.

Except from these, growth in shipped volumes are also weak. During Q1-2018:

If we assume a roundtrip on the Far East to Europe trade takes 10 weeks, that kind of growth requires only two additional 15,000 TEU containerships at a utilisation rate of 95%.

What is more, backhaul trades in Q1-2018 from Europe and North America into the Far East are suffering a lot, says BIMCO, falling by 8% and 5% respectively. Partly due to very strong growth on those trade in Q1-2017. Over a two-year period, Q1 backhaul volumes are up by 6.4% for Europe and 7% for North America, according to CTS.

In general, backhaul volumes into China are negatively affected by the import ban of waste products that came into force on 1 January 2018.