ClassNK has recently received several reports of sea water leakage detected from distance piece attached to hull on SOx scrubber discharge water line. Although the report concerns ClassNK-classed vessels, the design and possible problems are similar for all vessels with scrubbers.

Until now, the leakages were detected at an early stage and did not cause heavy water ingress into E/R.

However, ClassNK has concerns that similar incidents would occur in the future for the other vessels as well and may cause more serious accidents such as a large amount of leakage and water ingress into E/R.

As explained, leakages have occurred around welds between “distance piece” and “flange (Picture 1) or bluff body (Picture 2)”. 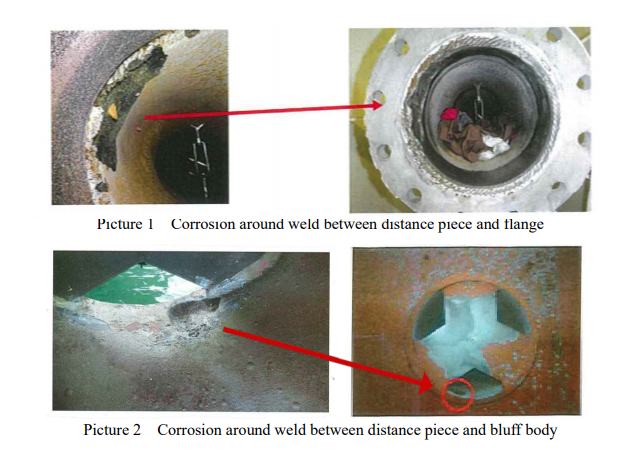 Having inspected the distance pieces internally, the corrosion occurred/progressed around the welds and caused the leakages finally.

In some cases, the progress of corrosion, which has not resulted in leakage yet, was found around the same welds.

As a result of the above, ClassNK recommends ship owners and managers to:

If a leakage were detected, temporary countermeasure to stop it (e.g. covering the distance piece with cement box) should be taken immediately, and Occasional Survey by the surveyor should be arranged as soon as possible.