The US Environmental Protection Agency (EPA) has issued a final rule for the 2019 Renewable Fuel Standard (RFS) program, with the total US renewable fuel volume requirement set 3% higher than the 2018 mandate, but nearly 30% lower than the statutory volume standards set forth by the Energy Independence and Security Act of 2007 (EISA 2007).

Namely, in addition to the past, EPA exercised its cellulosic waiver authority to lower volume standards for cellulosic biofuels since development is moving slower in comparison to what the Congress expected in EISA, passed more than 10 years ago.

Although the US RFS implementation had limitations by a slower ramp-up in construction of cellulosic biofuels, than what it was expected, there were other factors that contributed to a decrease from EISA 2008 volume standards too. In addition, US motor fuel consumption has been decreased in comparison to what it was expected, resulting to less transportation fuel availability to blend biofuels. Moreover, blending ethanol to gasoline has been limited to 10% because of issues concerning demand and infrastructure.

According to EIA, the 2019 official rule puts the total US renewable fuel volume requirements at 19.92 billion gallons, a 630 million gallon increase in the advanced biofuel target relative to 2018 levels. 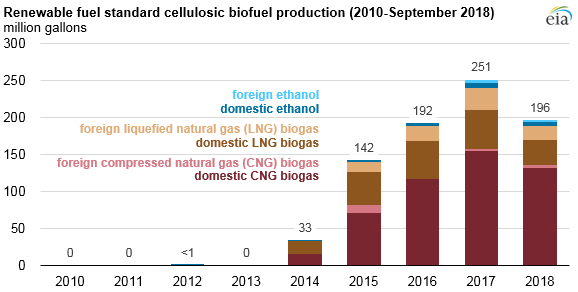 EISA 2007 wished that an increasing share of renewable fuel would be cellulosic biofuels, which have a lower GHG emissions profile than conventional biofuels. Cellulosic biofuels were intended to grow to 16 billion gallons by 2022, but the technology has not matured fast enough to meet the volume standards.

Concluding, by 2010 EPA has exercised its ellulosic waiver authority to decrease the cellulosic biofuel target every year. The 2019 official rule set the cellulosic biofuel mandate at 418 million gallons, or about 5% of the 8.5 billion gallon target envisioned by EISA 2007. Because the total volume of renewable fuel is by 20% decreased than statutory levels for total renewable fuel for the second year in a row, EPA is expected to alter applicable volumes for years 2020 through 2022, an practice called the reset rule. Development has occurred in cellulosic biofuels during the last several years, but at a much lower rate than originally envisioned by Congress. About 10 million gallons of cellulosic ethanol was used to comply with the RFS in 2017, about half of which was produced domestically. A 2014 final rule expanded EPA’s definition of cellulosic biofuel to include certain types of biogas. Since then, most of the increase in cellulosic biofuel consumption is from biogas, also called renewable natural gas, in either compressed or liquefied form. Production of renewable natural gas during 2017 was nearly 250 million gallons of ethanol equivalent.