In its weekly report for 30 Mar-5 Apr 2021, ReCAAP ISC informed of two incidents of armed robbery against ships in Asia. Both were CAT 4 incidents where the perpetrators were not armed and the crew not harmed.

One of the incidents occurred to a container ship while anchored at Jakarta Anchorage, Indonesia. The other incident occurred to a tug/supply vessel at approximately 4 nm south of Tanjung Piai, Malaysia while underway in the westbound lane of the Traffic Separation Scheme (TSS) in the Singapore Strait.

The first incident involves the Singaporean tug/supply vessel ‘Posh Falcon’, approximately 4 nm south of Tanjung Piai, Malaysia in the westbound lane of the Traffic Separation Scheme (TSS) in Singapore Strait, on the morning of 30 March.

While the tug boat towing the unmanned rig was underway, two small boats approached the stern of the rig and stole a Norwegian marker buoy that was floating 100m behind the rig. The buoy was connected to a messenger line used as an emergency tow line. There was no injury.

The incident was reported to VTIS and the Singapore Port Operations Control Centre (POCC) issued a navigational safety advisory to warn ships in the vicinity to be more vigilant.

Upon investigation, it was found that the perpetrators broke into the ship through a cut on the watertight door alarm switch wire and lock. Items from the engine room central store were stolen. There was no injury.

The local authorities were informed and the Indonesia Coast Guard boarded the ship for investigation. 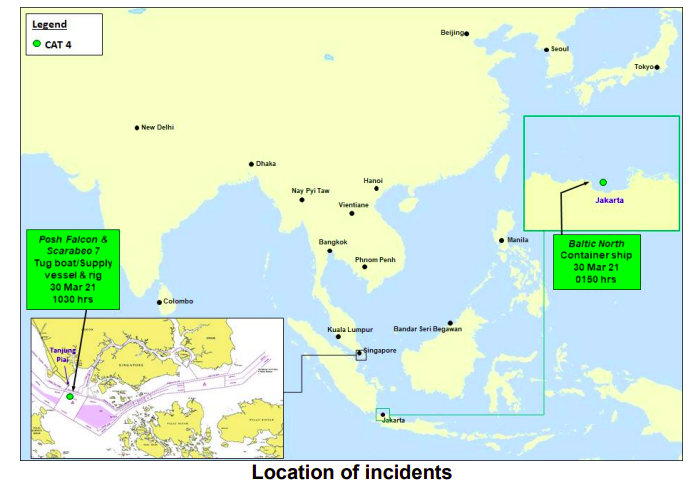 The weekly report also contains an incident reported outside Asia. The incident occurred on 24 March onboard the LPG carrier ‘Christoph Schulte’, while anchored at Alpha Anchorage in Cartagena, Columbia.

While at anchor, an AB during his routine rounds spotted three perpetrators armed with knives at the ship’s forward. The general alarm was raised, the ship whistle was sounded and an emergency broadcast via Ch 14 to the harbor master was made.

The three perpetrators left the ship by lowering the mooring ropes and escaping via a blue-hulled motorboat. There was neither damage to the ship nor crew injury.